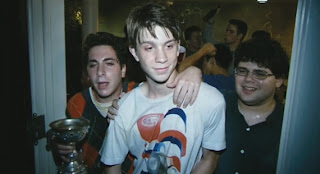 There is a code of objectivity that all journalists are supposed to abide by. As a self-proclaimed film journalist who tries to live by these rules, there are times when my objectiveness goes right out the door. With something like “Project X,” there is no other way to approach it.

“Project X” contains pretty much everything I usually hate in a movie: its sexist, stupid, overlong, and incredibly unrealistic. I did not hate it, and I did not love it either. However, I enjoyed just about every single minute of it.

“Project X” falls into the subgenre of the mockumentary genre, under the kingdom of comedy and or drama, known as the found footage footage movie. I just wrote that last sentence because it made me sound like a scientist. Anyway, it is less hilarious than “This is Spinal Tap” but more developed than “The Blair Witch Project.” Three best friends in high school, all incredibly unpopular, decide to throw the party of the century in order to get noticed. They hire someone (Dax Flame) to film the whole experience for them. He turns out to be a pretty bad fly on the wall, and the party becomes both a success and a disaster.

Thomas (Thomas Mann) is all but unheard of by most of the student body. Thomas is at the crux of turning 17, a birthday that is pretty insignificant because it provides no drivers license, legal drinking age, or any others rights of passage into adulthood. However, it would allow him to finally see “Project X” in theaters.

On the eve of Thomas’s birthday, his parents go away for the weekend. I know it’s their anniversary that weekend but come on, what parents would leave their son at home alone on his birthday? His dad lays out a series of ground rules, and most importantly forbids Thomas from touching his Mercedes while he is gone. From there, it is obvious that the Mercedes will not be in good condition by the end of the night. 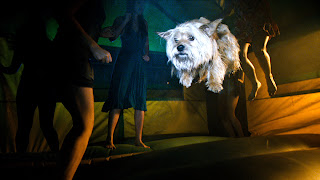 Of Thomas’s co-dependent best friends, Costa (Oliver Cooper) is the most instrumental in orchestrating the party. Costa is a little too confident in himself, and he is definitely not the marketer nor the ladies man that he thinks he is. However, the kid does pull out a pretty good defense, albeit an obvious one, when keeping the cops away. Think of him as a cross between Neil Schweiber and the creepy son from “World’s Greatest Dad.” Costa’s self-confidence is unearned, yet it works and is foul and degrading way of talking leads to many guilty laughs. Once he gets a better script, Cooper will become a big star.

Costa creates as much trouble as he gets into. He is like any Jewish kid I have ever known who thinks they are a lawyer just by default. He always manages to ruin Thomas’s life as he tries to make it better, because he is overall a bit too selfish. One of the movie’s primary problems is that this conflict is blatant, yet goes mostly unacknowledged throughout, and it tries to resolve itself through archetypal declaration of bro-love kind of scene. “Project X” has a lot of fun with the story at hand, but it never does anything new with it. Everything set up at the beginning of the movie will obviously come back to haunt the characters.

The two other best friends, JB (Jonathan Daniel Brown) and Kirby (Kirby Bliss Blanton), may also achieve big stardom. The awkward, overweight JB is the movie’s McLovin, and that’s why he is so easy to root for. But the biggest downfall of “Project X” is how it attempts to turn Thomas and Kirby’s friendship into a love story. It is as implausible as it is predictable.

Despite its unoriginality and predictability, the movie’s self-awareness and charm won me over at parts. “Project X” taps into gold in its first 30 minutes. It is at this time where the movie actually feels realistic. Yes, the kids are offensively vulgar, but they talk the way most teenagers and college kids talk nowadays. I don’t know what that says about our sick society, but “Project X” never attempts to be any kind of statement. All it ever wants to be is wish fulfillment.

When looking back at “Project X” I realize the very best of it lies in individual scenes, rather than the movie as a whole. Take for example how hilariously uncomfortable and creepy the sit down with the drug dealer is, as James Blunt’s “You’re Beautiful” plays in the diegesis.

A lot of the movie’s utter insanity starts off as fun, before it actually becomes utterly insane. The party’s 12-year-old security guards are scene stealers, and while it is morally offensive to cheer them on as they tase an innocent father, you don’t have to feel too bad because the party has to go on somehow. “Project X” asks you to think like a teenage boy. So yes, there will also have to be topless girls at this party. The documentary style of “Project X” lends itself well to the story, but it does break away for the format quite a few times. The movie as a whole is a great time until it goes down hill at the end, and succumbs to Multiple Ending Syndrome. No movie that is under 90 minutes long should ever feel like it drags on. But what can I say, this review is only going to be half negative. I ate up almost every minute of “Project X,” and I found myself in fits of laughter at times, laughing at things that had no right to be that funny. Even when the dog gets high, I laughed. The spirit of anarchy throughout works.

“Project X” is polarizing in its demographic reach, but for once, can’t us guys get something more or less just for us? Something that’s vulgar, unintelligent, and even kind of real? Sorry, “Twilight” still doesn’t work for us.