“Hitting the wall” is the Cannes related phenomena in which a while’s worth of no sleep comes together in spectactular fashion.
I have not quite hit the wall yet, but I feel that I am on course for collision.
Today was yet another rainy day, yet it was also a day of many lessons. I learned that Macedonia has a film industry, the Czech Republic gives out generous amounts of free wine, and that the end of “Inception” is (SPOILER ALERT) undoubtedly reality. This is a fact that most people probably knew about three years ago. More on that coming up.
After the Jump: Meeting IMDB’s creator, Col Needham, and walking out of a movie for the first time.
One of the main highlights of my trip occured today. I met a man wearing a jacket with an IMDB pin on it. I asked him if he worked for the site. His response was something along the lines of “actually, I created it.”

Col Needham created IMDB for the exact reason you’d expect: he was a film buff who needed a convenient place for all things film. He told me about the experience of seeing “Aliens” in theaters for the first time. And that “Inception” thing. In every scene in which DiCaprio is wearing his ring, it is a dream. When he isn’t, it’s reality. At the end, he is not wearing his ring. While this ruins the fun of the ambiguity, it made me appreciate the film much more, as this displays Nolan’s attention to detail. I still maintain though, that the real point of the ending is that it doesn’t matter whether or not the top fell, all that mattered is that he was exactly where he wanted to be. I now proclaim the “Inception” debate officially over [Editor's Note: I'm being told that it ended two years ago].


Unfortunately, I come with few new screenings to share stories of. “Rust & Bone” is the most talked about film around, but good luck finding a seat for it. After an unsuccessful attempt at seeing that, I decided to be a little impulsive and see a screening with basically no prior knowledge of it. I landed on “White Elephant.” All I heard in advance was “Argentinian movie about drug cartels” and I was sold. I still can’t even decide if it was actually about that. Don’t get me wrong, I like slow-burning films, and Cannes is the perfect place for that. However, there is slow, and then there is too slow, and “White Elephant” falls into the latter category. Nothing happens for a while, and when it does happen, I just felt myself shrug, and want to go back to sleep. 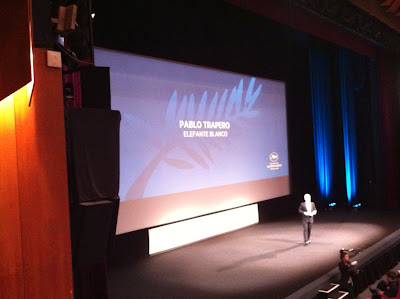 That is another thing about “the wall”: it can hit at anytime, during the events you don’t want it to happen during. It is usually hardest to fight it once the lights go off in the cinema. It can be resisted by seeing “Lawless” and not “White Elephant.”

“White Elephant” marks a sad turning point in my life, as it was the first film I ever walked out off. I don’t plan to indulge in this behavior normally, but walking out of a film early feels nornal at a film festival. Once again, slow and tortorous are two very different things. I will review “White Elephant” no further, as I did not see the second half, and it is entirely possible that I could have missed something worthwhile. Also, a film must be reviewed as a whole. Missing any of it and the intended bigger picture is sullied.

The only reason I feel less terrible for walking out is that this seems to be a commonplace action in Cannes. I have never seen this many walkouts per capita in my life over the span of the Festival. While there is usually value to seeing a bad movie, as it makes you realize what it takes for a movie to be good, there is just so much to see at Cannes that any amount of time spent in a bad film feels like time wasted. As the phrase that I never wish was invented goes, “YOCO” (You Only Cannes Once).*


*I strongly reccomend never using this in daily conversation.