I’m so sorry. I feel like I’ve committed a crime.

For months now, I’ve been meaning to write about “Modern Family,” the best comedy currently playing on television. With the season finale fast approaching, some might think it’s too late. Me, I think it’s the perfect time. As the entire season has now unfolded, and the characters are totally developed, it’s time for me to convince you to watch “Modern Family.”
Like any good sitcom, “Modern Family” takes a tired subject (dysfunctional families) and breaths new life into it. In fact, it’s the best family-centered comedy on TV since the end of “Arrested Development.”
Like “The Office,” “Parks and Recreation,” and “Summer Heights High,” “Modern Family” is shot entirely in an interview mockumentary style. It focuses on three different but connected families. The main patriarch is scotch guzzling Jay (Ed O’Neill) who loves his family as much as he loves making racist comments. He’s recently married to young Colombian Gloria (Sofia Vergara) who has brought along with her 10-year-old son Manny (Rico Rodriguez), who acts about 40 years older than he actually is.
Then, there’s Jay’s daughter Claire (Julie Bowen), who is the definition of uptight yet caring mother. She’s married to Phil (Ty Burrell), who has the body of an adult, but the mind of a child. Together, they have three kids: a ditz (Sarah Hyland), a brain (Ariel Winter), and another ditz (Nolan Gould).

And finally, there’s Claire’s gay brother, Mitchell (Jesse Tyler Ferguson). His boyfriend is the flamboyant, yet always hilarious Cam (Eric Stonestreet), and the two recently adopted a Vietnamese baby.
This is the premise, boiled down. I could go in deeper and deeper but then I’d have no room to analyze. So what I will say is that from there, the show deals with the relations between each family, and how they cope with the idea of staying together when external factors serve to pull them apart.
Though, even that doesn’t do the show justice. Hopefully, this will: it’s sick, it’s twisted, and in that, it’s beyond hilarious. It has a degree of boldness that seems to be lacking from most network TV shows.
“Modern Family” has what every good comedy needs: great writing. What’s even greater is that the show never restricts itself to one brand of humor. Each character in some way embodies a different style of humor. Phil, who seems to always either be falling or being locked in port-o-potties embodies the show’s slapstick side. Claire and Mitchell embody the concept of the “straight-man.” Jay and Alex are examples of good old wit. And Haley is just an example of why stupidity can just be so funny.
It is a testament to the greatness of the writers that they can constantly balance slapstick and sophistication along with stupidity and wit and never lose balance. There are big visual punchlines involving fake mustaches and spicy food, along with brilliant, snappy one-liners.
“Modern Family” is an ensemble show so of course it would’ve suffered with poor actors. Fortunately, the acting is quite strong. If I would, I’d find praise for every single actor in the cast but instead, I’ll just point out the most notable ones. O’Neill’s entire character seems to be a reference to his role on “Married…With Children,” yet here he seems to have a little more of a heart.
Meanwhile, Burrell and Stonestreet play two characters that easily could’ve become caricatures. Yet, they find the right way to emphasize both their quirks and their humanity without losing sight of either. Then there’s Vergara who’s sassy attitude never gets old. She turns Gloria into something endearing and she is well on her way to becoming a big, new name in comedy.
At the end of the day, the best comedies are great not just in how they make you laugh, but in how they make you feel. Some might enjoy “Modern Family” by finding common ground with it. While its documentary style could’ve provided the viewer with an objective, mocking look at modern American family life, it instead totally invades the home and becomes a part of it. 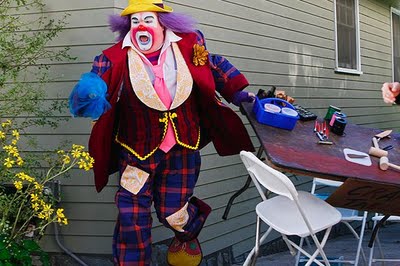 In this respect, the audience is therefore forced to see both ridiculous actions, and the justifications for them. That could be poor intentions, or just plain misunderstandings. When quirks are emphasized, so are flaws, and when flaws are emphasized, characters escape becoming nothing more than cardboard cutouts. The show’s complex look at family matters evokes the tagline of “The Royal Tenenbaums”: “Family isn’t a word…It’s a sentence.”
There are a lot of good comedies on TV right now. “Modern Family,” in its very first season, manages to stand above them all because it manages to remain so consistently funny. Even in weaker episodes, there is always a laugh to be had. This is a great sign that the creators, the writers, and the cast know exactly what they’re doing, and exactly where this show is heading. With hit-and-never miss humor like this, “Modern Family” looks like it’ll be around for years and years to come.
Share on Tumblr