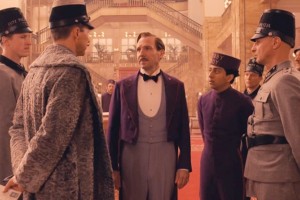 The Grand Budapest Hotel constructs a European past that looks like a game of Candyland, yet feels like a very serious history lesson about events that never actually happened based on events that really did happen.

The Grand Budapest Hotel, the eighth feature film by the one and only Wes Anderson, is his most dense, elaborate, and cartoonish (even though he has made an animated film). It seems like the kind of film you get to make once you turn stories like Moonrise Kingdom into Oscar nominated hits.

At times, this film feels like Wes Anderson’s attempt to top his own whimsy. There are only a few moments that are annoyingly typical of him (oh look! a humorously disabled child!). However, I think it is better to invent your own clichés than to steal them from others. More importantly, he weaves those clichés he invented into gold. I mean, this is about a girl reading a book about an author telling a story about how a man told him a story. It turns out, F. Murray Abraham makes as good of a narrator as Alec Baldwin (in The Royal Tenenbaums) once did.

Tom Wilkinson plays a writer (who is fittingly not given a name) struggling to write a story that has been sitting around in his brain for many years. As a younger man (the younger version of himself is played by Jude Law), he stayed at The Grand Budapest Hotel and met the hotel’s owner (F. Murray Abraham), who tells the story of how he came to run the once great hotel.

The hotel is located in the fake country of Zubrowka, which probably neighbors The Marx Brothers’ Freedonia. The hotel itself is a character, and the film itself is kind of like if Steve Zissou sold the Belafonte and bought a hotel. Yet, no matter how colourful the rooms are, this is the rare Wes Anderson film in which the characters’ personalities outshine the world around them. As the womanizing (only of the elderly) past owner of The Grand Budapest, Ralph Fiennes proves he is as good at being funny as he is at being serious. I guess I should have expected that much from the man who has the best line (“you’re an inanimate fucking object!”) in In Bruges.

Oh yeah, that cast. The Grand Budapest Hotel has such a sprawling ensemble that it even manages to fit Tilda Swinton in there almost completely undetected. While the big names slip and out, newcomer Tony Revolori still comes out a star as Zero. No matter how many different narrators there are, or how far down he is listed on IMDB, Revolori deserves to be known as the film’s true lead.

The Grand Budapest Hotel is unabashedly strange and often hard to follow. However, it embraces its own oddities from the very beginning, and that is what I most admired about it. There are several points where we are asked to believe that a bunch of live actors are actually going to get into a gondola that looks like it was made out of a cardboard box. And yet, it still feels real. Wes Anderson always lets his settings have a meaning. In Grand Budapest, the almost fake looking world is like the imaginary bubble that M. Gustave has set up for himself in which the coming war cannot effect him or his beloved hotel. Somewhere along the way, there is a murder mystery and a stolen piece of art. Adrien Brody once again dons his Salvador Dali mustache plays a psycho who looks like a vampire. Just roll with it, or you won’t have any fun.

On the surface, Grand Budapest appears to be Wes Anderson’s least deep film. Unlike, say, The Darjeeling Limited, Grand Budapest knows that there is more than meets the eye, but it doesn’t bombard you with symbolism. The only thing you are really bombarded with are severed body parts and old lady boobs. More accurately, The Grand Budapest Hotel is to Wes Anderson what The Hudsucker Proxy is to the Coen Brothers: light entertainment on the surface that gets better on repeat viewings.

Then, when you least expect it, The Grand Budapest Hotel has a strong emotional impact. The beauty of a Wes Anderson film is that he can make you care about the characters and you won’t even realize it until the end. When The Grand Budapest Hotel ended, I yearned for more. Hell, within the first five minutes, I knew this wouldn’t be my favorite Wes Anderson film, but it would be one that I would watch again and again. Sometimes, rewatchability is the greatest gift a movie can give.

Brain Farts From The Edge (Some Very Minor Spoilers Ahead)