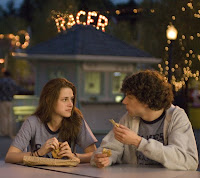 I never had the pleasure of growing up in the 1980s. However, after watching “Adventureland,” I almost feel like I did.

The best period pieces must be made years after the year they are set in, especially if they’re a teen angst dramedy. “Dazed & Confused” was set in 1976, but came out in 1993. “Adventureland” takes place in the summer of 1987. It’s a few months before the “Black Monday” stock market crash, but already the family of James (Jesse Eisenberg) is facing financial trouble. James recently graduated from college. Before going to grad school in New York, he plans on spending the summer in Europe. However, his father’s recent demotion brings an end to his plans, and instead James must work the summer for grad school money.
The job market of ’87 looked just about as bad as the job market of ’09, as James can barely get a job. However, there is one place in the Pittsburgh area that will take him: Adventureland Amusement Park. Taking this job becomes both the best and worst mistake of his entire life.
While working there, James associates with philosophical Joel (Martin Starr), an immature friend (Matt Bush), a failed rockstar (Ryan Reynolds), two awkward bosses (Bill Hader and Kristen Wiig), and of course, Emma (Kristen Stewart). In Emma, James finds what he could never find in any other girl.
Besides the relationship between James and Em, “Adventureland” has no strict plot to follow. It would make sense that writer-director Greg Mottola, who also directed Judd Apatow produced “Superbad,” would use this Apatow plot device. However, credit for this goes way back to directors like Hal Ashby. Ashby never attended to make plots; but rather, people. In movies like “Harold and Maude,” Ashby just tried to let the growing relationship between Harold and Maude but on its own. Mottola attempts to do the same with James and Em.
Mottola is not known as much for film as he is for television. He’s directed episodes of two of the best shows ever: “Undeclared” and “Arrested Development.” However, he’s started to become a formidable comedy movie director. While “Superbad” was certainly well made, “Adventureland” truly shows his talents for he both wrote and directed it. Therefore, “Adventureland” feels like a much more personal film, as he is bringing to life his own story and not somebody else’s. That is probably why every shot is filmed with both giant and pain and an ounce of joy, a sort of uplifting light of love seems to shine from above throughout.
“Adventureland” is to the ’80s what “Dazed & Confused” was to the ’70s: an extremely stylish, extremely accurate piece of nostalgia. Like any good director making a period piece, Mottola focuses on the little details to make the movie feel exactly like the ’80s. And it does. He emphasizes everything from the cars, to the outfits, to the way people dance. He especially emphasizes the music. He uses many bands popular in the ’80s; mainly the soothing sounds of Lou Reed & The Velvet Underground. The soundtrack, while great to listen to, is there for a reason. It’s not only there to remind us of the decade we’re watching, but to also reveal little minor things about the characters. For example, Mike’s (Reynolds) inability to name the song “Satellite of Love” correctly reveals his underlying phoniness.
The characters for the most part, are well cast. Eisenberg broke out in 2005 with “The Squid and the Whale.” While he played Walt in “Squid” with much more hidden sadness and an outer layer of betrayal, all of James’s emotions are on his sleeves. Eisenberg plays him with flawless awkward vulnerability. He is no doubt one of the best young actors out there today.
Perhaps the film’s biggest mistake is Reynolds. He is a decent actor, but he really doesn’t bring much to the character. While it would’ve been nice to see Mike played with much more vulnerability, Reynolds just makes him seem like too much of an invincible human being. Maybe that’s because Mike is a little smug, but he obviously has some marriage problems.
Another small mistake made by Motolla is the criminal underuse of Hader and Wiig. The pair is only in a few scenes. However, Hader steals every moment he’s in, bringing that same zaniness to the film that has made him one of the funniest people in comedy. Wiig manages to be funny by just standing there and making creepy faces. I don’t think it would’ve killed them to give her a few more lines, but maybe she’s just one of those comedians like John Belushi whose funnier when they aren’t saying anything.
Perhaps “Adventureland” is such a convincing nostalgia film because not only does it feel like your looking at the 1980s, but it also feels like a movie that could’ve been made in the ’80s. The influences of such ’80s icons as John Hughes and films such as “Fast Times at Ridgemont High” feels tangible. While I enjoyed pretty much every minute of this hilarious and moving dramedy, some references did escape me. Oh well, I guess you just, kind of had to be there.
Recommended for Fans of: Dazed & Confused, Fast Times at Ridgemont High, The Graduate, Superbad, Knocked Up, The 40 Year Old Virgin, Harold and Maude, The Last Detail
Share on Tumblr