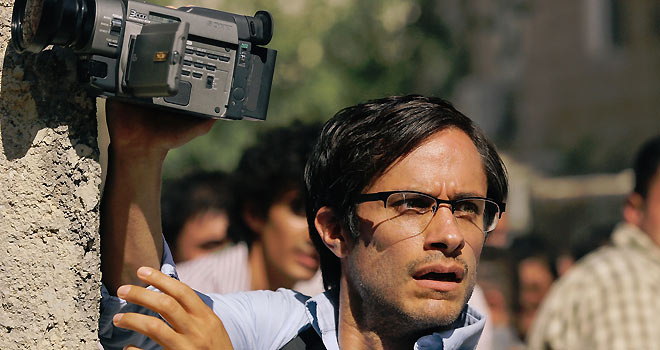 WARNING: This review contains spoilers for real life. Do not read this review if you are an idiot.

Hold the phone, are you telling me that they let a comedian direct a serious movie? What’s next? Dogs wearing suits to work? Civil debate between Democrats and Republicans? We can only hope.

Rosewater, the directorial debut of Daily Show host Jon Stewart, is less of a passion project and more of an obligation. If you don’t know the story behind the making of Rosewater, I will try to sum it up as briefly as possible: during the lead up to the controversial 2009 Iranian Presidential Election, The Daily Show‘s Jason Jones traveled to Tehran to shoot a few pieces for the show. During that time, he interviewed journalist Maziar Bahari. The Iranian government found this footage and used it as evidence against Bahari, accusing him of being a spy. For this, Bahari was held captive in an Iranian prison. This prison has everything: solitary confinement, maggots, an interrogator who’s just trying to keep his marriage together. Bahari is tortured and accused of colluding with everybody from the CIA to Mossad.

Everybody is talking about how it is such a big deal that Stewart is taking on such heavy subject matter. But think about it this way: Stewart deals with this level of drama four nights a week. If not the Middle East, he is talking about climate change or how our government is completely dysfunctional. Comedians thrive on tragedy. Comedians make us feel like we can confront the worst of the world by laughing at it. It is the gift that keeps on giving.

Rosewater marks Stewart’s first time in the director’s chair. It is an impressive, if sometimes flawed, directorial debut. Its ambition and sincerity make it worth watching. Sure, you can call it a drama all you want, but that completely overlooks the film’s humor, which ends up being remarkably helpful during the interrogation scenes. Rosewater is different from most other films of this kind in that the interrogation purposefully feels staged. It keeps tugging at the very loose strings holding this whole case together and finds that there really isn’t much logic holding it all together. As Bahari’s interrogator, whom he nicknames Rosewater (Kim Bodina), questions him about everything from his love of Leonard Cohen to his time spent in New Jersey (come on, it’s Jon Stewart, of course he’s going to bring up Jersey), it is clear that this whole situation is absurd. The way to survive such terrible circumstances is to view it as farce. Even though Rosewater is about misery, its sense of humor in the face of adversity keeps it from being miserable to watch.

Gael Garcia Bernal portrays Bahari with a level of warmth. Sure, they share some physical resemblance, but Bernal also seems to capture Bahari’s ability to be the most interesting man in the room, even when he is simply acting as observer. In another life, Bahari would have made a great Daily Show correspondent.

Rosewater suffers from many of the problems that might come about in a feature film directorial debut. It suffers from some pacing problems. Early on, it feels remarkably slow for a film that is fairly short. Stewart does a solid job capturing a side of Iran that is normally unseen, a side that is teaming with life and ultimately beautiful. Unfortunately, a lot of that is lost in the film’s heavy dependance on archival footage. Showing the original footage from the protests is important. But like Munich and Frost/Nixon show, it looks better if you blend it in. At certain points, Rosewater depends on cable news reports to tell the story. Yet, The Daily Show has spent the past decade teaching us that cable news should not necessarily be trusted. Therefore, it seems like an odd crutch to lean on.

Rosewater works best when it focuses on the absurdity of life and the game between Bahari and Rosewater. The best parts are the ones that feel like a unique spin on recent history, rather than a slideshow of it.