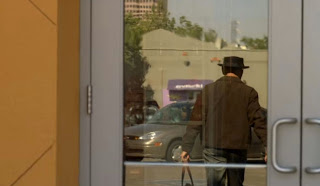 “Now you’re looking for the secret. But you won’t find it because of course, you’re not really looking. You don’t really want to work it out. You want to be fooled.”
-The Prestige

Could there have been a more perfect song to put into a “Breaking Bad” episode than “Crystal Blue Persuasion”? I wonder how long Vince Gilligan was waiting to use that song, because tonight’s episode, “Gliding Over All” seemed like the perfect place for it. Tonight, it was more apparent than ever why Walter White’s crystal blue meth is both the best and worst thing to ever happen to him.

“Gliding Over All” was one of the most important and exciting episodes of the series, which I tend to say about almost every episode. However, this one was different than most “Breaking Bad” episodes. Most episodes tend to pick their pace wisely. One week we will get an action packed thriller and the next week will be slow-burning exposition and character work. However, the mid-season finale gave us a little bit of both.

Following the death of Mike, Walt appeared to be much more humbled than he was last week. Even though Walt told Jesse that he did what had to be done (although Walt didn’t actually say that Mike was dead), this obviously wasn’t true. Despite their constant fighting, I have a feeling that Walt had a lot of respect for Mike, as Mike was a man who knew what his job was and knew how to do it well. And as we could see from all of the orders Walt barked at his hired men this week, all he wants is for people to do what they’re paid to do.

If last week saw Walt going through the “ego” stage of the “Scarface Stages of Power,” this week saw him in paranoia mode, which is probably not far from downfall. If anything could perfectly demonstrate paranoia, it’s having nine guys brutally stabbed to death throughout various prisons in the span of two minutes. Walt timed out the murder spree on the watch Jesse got him for his birthday, and it all went down as planned. As I said during the great train robbery, only in the “Breaking Bad” universe could I believe that such events could go on without a hitch. This scene was the first great montage of the episode. Set to what sounded like Christmas tunes from the 1950s, the manic nature of the scene was unsettlingly hilarious and fun to watch. The montage was worthy enough for a Martin Scorsese film, from which it seemed to be heavily influenced. 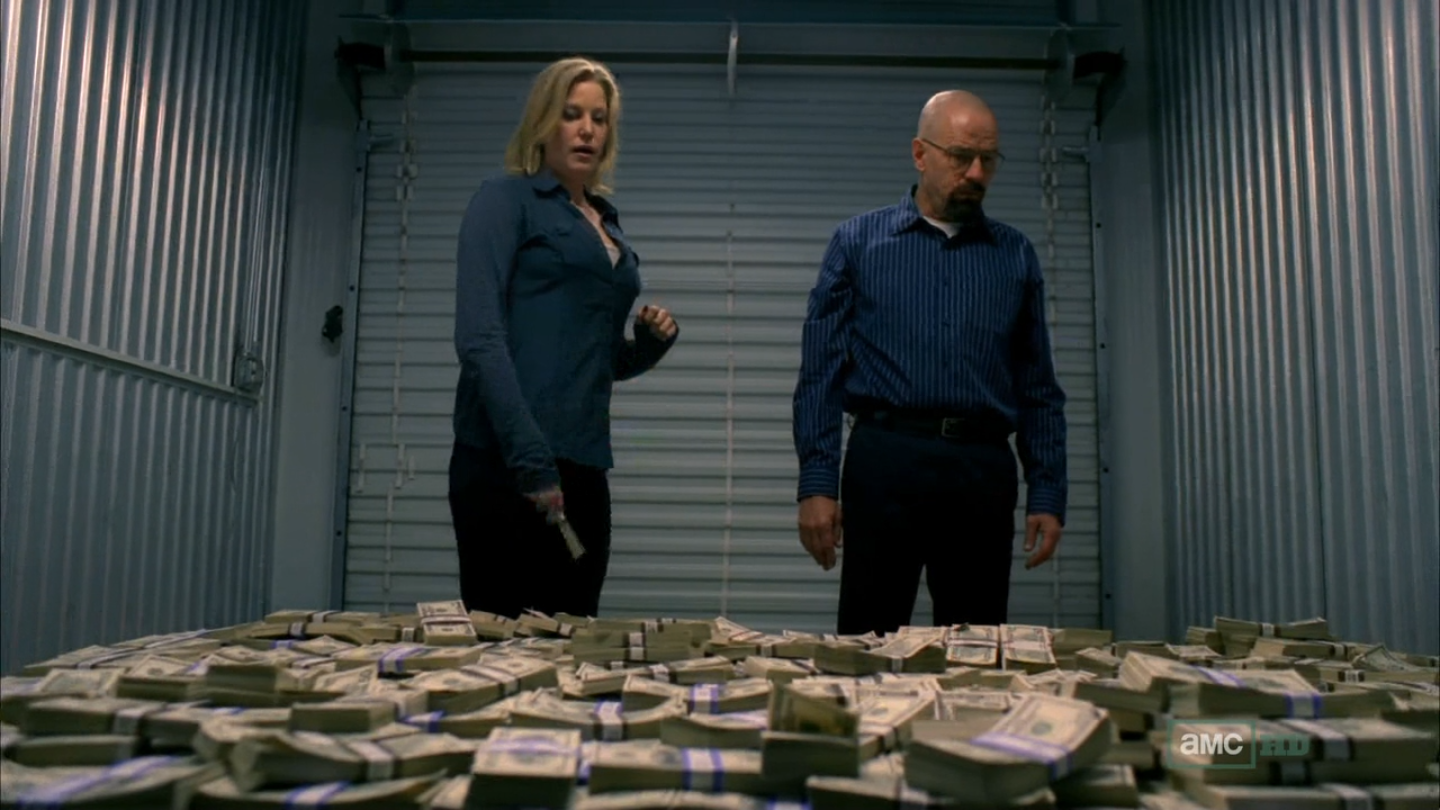 The episode’s second great montage came from watching Walt and Todd in the process of making and profiting off of their product. This was the one set to “Crystal Blue Persuasion” and to me, it nearly matched the breakfast montage in “Citizen Kane” in both energy and innovation. While comparing works of art to “Citizen Kane” is usually frowned upon, I believe the comparison comes in handy here, as this show is continually pushing its form forward. From the moment of the transition to Walter putting on his gear to the panoramic view of fumigation tents popping up one after another across the suburban landscape, both the scope and toil of the whole operation can be seen. I believe “Breaking Bad” will one day be taught in film school. “Gliding Over All” would not be a bad episode to put on the agenda.

As the “Crystal Blue Persuasion” montage showed, being a drug kingpin is not a simple path to easy money. Being king is a commitment. The tragic part of Walt’s reign is that he is starting to realize that being king is not all that it’s cracked up to be. Having all of the money you want provides more restrictions than freedom. Maybe Walt was better off staying Gus’s underling. At least then he had the freedom to kill his boss whenever he wanted to.

As Walt began to understand the downsides of power, the shackles of his past began to come back to haunt him. “Breaking Bad” has always been masterful at plants, payoffs, and callbacks, and this week they were plentiful. As Alan Sepinwall pointed out, the painting that Walt was transfixed by was the same one that hung in his hospital room during a season one episode. Perhaps it brought him back to a better time, despite the fact that he was dying of cancer then. However, it was at that moment that his entire family surrounded him and refused to leave his side. Now, instead of being with his real family, he was with a family that wasn’t his own. If we want to bring this back to “Citizen Kane” again, then Walt’s family is his Rosebud.

Yet another callback this week was the dented towel dispenser, which Walt had punched violently in season two after finding out that he had gone into remission. The results of this week’s MRI scan were left a mystery but whatever it was, I don’t think it mattered to Walt anymore. If the result was pain, who would cry with him? If the result was joy, who would embrace his good health?

The scene in which Walt visited Jesse was Walt’s most genuine moment of this half of the season. He had no intention of talking business with him. Rather, they reminisced about their RV. It was a really nice moment between friends, and it shows that the relationship between Walt and Jesse has blossomed into something much more than a partnership throughout this series. This is a friendship that Walt and Todd will probably never share.

After Walt left, Jesse saw the body bag filled with money* that Walt had left for him, after promising him nothing. Jesse pulled out a gun that he had at his side and tossed it to the floor. The most dangerous aspect of Walt and Jesse’s relationship is that Walt secretly takes away the things that Jesse loves, which then drives Jesse to rock bottom. And when Walt does one good thing, Jesse automatically feels like he is the bad guy. This seemed like it could have been Jesse’s final moment in the show, but he is too strong of a presence to just disappear. Also, I still find it hard to believe that Jesse will never find out the truth about Brock, Jane, and now Mike.

This week also included the reconciliation between Walt and Skyler. Skyler showed Walt the uncountable stacks of money that she has been keeping safe for him and in return, she begged for her kids back. For the first time in a very long time, Walt and Skyler wanted the exact same thing. Then, the episode brought Walt, Skyler, Hank, Marie, Walt Jr. and baby Holly out by the pool that they used to spend so much time by. Only here could a scene of domestic bliss feel so eery. It was apparent that no season finale could end this way.

And the season finale did not end that way. Most people predicted that Hank would find out Heisenberg’s true identity by the end of this episode. Only “Breaking Bad” can make predictability seem so fresh. In the episode’s greatest callback, Hank found the Walt Whitman poem and W.W. initials that he discovered in Gale’s notebook in season four. Earlier in the episode, that same Whitman book, entitled “Leaves of Grass,” could be seen for a split second. In “Breaking Bad,” every shot is important. For some reason, it just seemed right up Vince Gilligan’s alley to have Hank discover this explosive secret while sitting on the toilet. Hank, who was starting to grow frustrated with his job, just found a whole new reason to keep on going, while the rest of season five just found its biggest plot point.

With its roots in the American West, “Breaking Bad” is starting to remind me more of a five season long folk song. Walter White is beginning to find himself a little bit like the anti-heroes Johnny Cash always sang about, who discovered that the power found in money and guns don’t necessarily make you a free man. I think the last eight episodes of “Breaking Bad” will give us a man who has stopped living by “Scarface” and instead has listened to “A Satisfied Mind” a few times.

*Am I the only one who thought that Mike’s body was going to be in that duffle bag that Walt gave to Jesse?

-This episode saw the return of the Ricin. Lydia almost became the latest victim of Walt’s favorite poison, but she struck a deal to save her life. She did what she was supposed to do and for that, I think Walt might take her up as a new partner.

-Not nearly enough Saul Goodman these past few episodes. But with that flash forward still in mind, there is no doubt that his last ditch plan that he presented to Walt in season three will come in handy.

-There was something very unsettling about seeing Heisenberg in such a fancy cafe.

-Surf the web for some more discussion boards and reviews of this episode. There are even more callbacks than I can count. This show truly rewards its most loyal viewers.

-There are also some interesting theories connecting these last two episodes to “Willy Wonka and the Chocolate Factory.” What started off as a joke became a smart, legitimate theory.

-I couldn’t resist this. When Skyler tells Walt that she “just wants her kids back,” this was the first thing to come to mind: