Image via The Next Reel

Besides monkeys, dogs are probably the best movie characters to come out of the animal kingdom. Sure, they can’t read any dialogue, but sometimes they can steal the show with a well-timed reaction shot, or a ridiculous outfit. Get it? They are wearing clothes! Animals aren’t supposed to wear clothes! What a world!

Anyway, I thought it was about time that man’s favorite four-legged friend got some recognition, because they will never get to win an Academy Award. Before I present my list, here are some important ground rules:

1. No dead dogs! If Game of Thrones has taught me anything, it’s that all men must die, but that doesn’t mean you need to use a dead dog to make an audience cry. Sorry, Marley & Me, My Dog Skip, and Every Wes Anderson film. Seriously, I still don’t know why Wes Anderson likes killing dogs so much.

2. No animated dogs! These dogs must be reel and real. Sorry, Oliver & Company and All Dogs Go to Heaven.

3. There must be actual dogs in the movie. Sorry, Dog Day Afternoon and Reservoir Dogs.

Clearly, I put way too much thought into this. Anyway, here is my list of ten of cinema’s most memorable dogs:

It would be downright blasphemous to make a list of dog movies and not include Air Bud. Air Bud is a fairly ridiculous movie that is perfect for the whole family. While this dog can’t talk, he is really good at bopping his nose hard enough that it causes a basketball to go into a basket. This is a literal underdog story, and I bet you that is how it was pitched at the studio. Air Bud would later inspire countless spin-offs about a Golden Retriever playing a sport which somehow turned into a movie where a bunch of puppies go into outer space. Now, I have never done acid, but I wouldn’t be surprised if it contributed heavily in the writing of Space Buddies.

Baxter is a vital part of the absurd brilliance of Anchorman. Somehow, Ron can speak dog, but also the dog can bark in Spanish (and yes, I fully believe that Baxter can speak Spanish). The closest I will get to a dog death on this list is the moment that Baxter gets punted off the bridge by Jack Black. Luckily, Baxter lives another day to save Ron and the gang from a pack of vicious bears.

I still think The Artist had no place winning Best Picture, but Jack Russell Terrier Uggie deserved all the praise he got. Some might say that Uggie became an even bigger star than anybody else in the film (okay, except for John Goodman). Uggie went to every Red Carpet dressed in a tuxedo, and it was hilarious every single time. Uggie even “wrote” an autobiography, because in America you get rewarded for doing nothing. Uggie only had 15 minutes of fame, but I’m sure that did not bother him at all. After all dogs have short attention spans.

While Homeward Bound has two dogs and a cat, this one goes to the dogs. Shadow and Chance are a bit of an odd couple, but that is probably why they make the best of friends. I could not stop watching Homeward Bound as a kid, and that is probably because it tackled my emotional yearning to own a dog (that wouldn’t come until a few years later). Also, Homeward Bound does not get the credit it deserves for nailing the art (yes, I used that word) of the talking animal movie: don’t make their lips move, it’s creepy. Animals often communicate through body language anyway, so just letting the dogs be dogs and the voice serve as an internal monologue seems more natural. Plus, if you turn the sound off, Homeward Bound is just 90 minutes of animals staring at each other.

With time, some works of pop culture are suddenly hailed as classics, just because they were a childhood staple. What many people don’t realize is that a lot of the crap we liked as kids is…well…crap. The Sandlot is an exception to this rule, because we will probably never see a family movie again that involves a kid sexually harassing a lifeguard. Anyway, this movie is centered around the legend of “The Beast,” who, in the end, spoiler alert, turns out to be a nice Mastiff named Hercules. I am not normally a Mastiff fan (they are giant slobber monsters), but I like this Hercules way more than any Hercules movie that has come out this year.

This classic from Hollywood’s Second Golden Age would not normally be called “cuddly” or “adorable” by anybody. Yet, Serpico’s sheepdog shows our hero’s his literal soft side. He gets the dog early on in the film as a puppy, and as Serpico sacrifices every last bit of happiness he has in order to expose corruption in the New York Police Department, he loses everybody he loves. Yet, that shaggy sheep dog remains by his side. 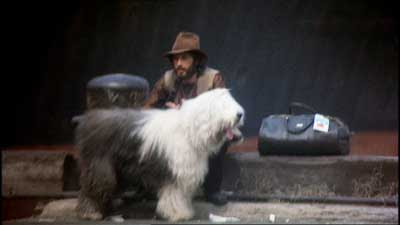 There’s Something About Mary

I might have a few too many yippy little dogs on here, but this one dog defies the laws of nature. Unlike cats, dogs aren’t known for having nine lives. If you drop a dog, they will not land on all fours. This dog, however, is nearly indestructible. Well, he does wind up in a hilarious body cast after eating some pills that he should not have eaten. BONUS DOG: That huge Great Dane who steals Jeffrey Tambor’s script in one of the funniest, more subtle jokes in a comedy that is not known for its subtlety.

The old saying goes that people look like their dogs. Wayne’s World takes that statement literally, as Garth’s dog, who only makes a brief cameo, sports the same ridiculously 90s hairdo that he does. Like Ron Burgundy, Garth can also communicate with his dog, but a lot of barks get lost in translation. I cannot emphasize enough how much this scene made me laugh in third grade, and how much it still makes me laugh today. 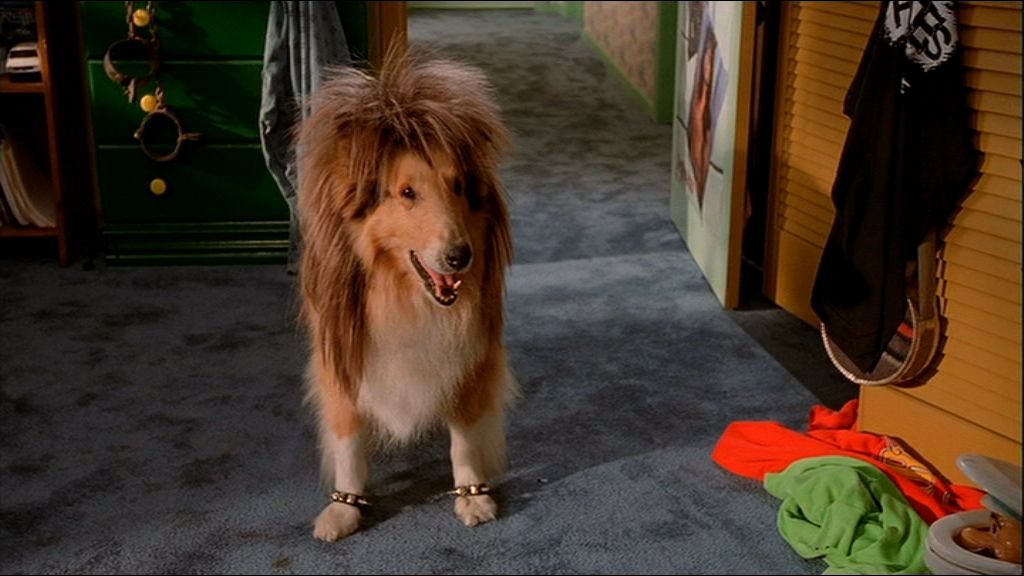 In one of the most chilling and iconic moments in Kurosawa’s samurai classic, a dog wanders across the street with a human hand in his mouth. Now, dogs will eat just about anything. I hope this dog got a pay rise (or at least extra treats, given that dogs have no use for money) for transferring this severed hand without eating it whole.

Comedy is partly about sharing the spotlight. If you’re in a pair, you can’t just be funny; you have to show the world why your partner is just as funny as you. If I were ever to get to choose an improv partner, then I would definitely go for Mugatu’s dog. That dog has no problem giving his comedy partner (I don’t know whether this dog is male or female, but I assume that all dogs are boys) Will Ferrell all of the spotlight, only to chime in every once in a while for a little whimper. Plus, this dog can brainwash and dress well. However, he needs to learn how to dodge eggs.