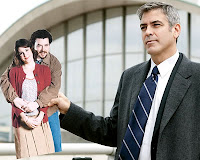 I won’t go as far as to say that “Up in the Air” is the best film of our time. However, should a future alien life form want to learn about our time and culture through film, they should look no further.

“Up in the Air” is the kind of film we need right now; it’s one that allows the life of one man to mirror our very own existence.
“Up in the Air” is based on a 2002 novel of the same name. The film version is given a 2009 financial crisis twist. Ryan Bingham (George Clooney) is a corporate downsizer, going from city to city firing people for corporations too afraid to confront their own employees. While some might face a guilty conscious doing this job, Bingham has developed an addiction to his life on the open road. In fact, he’s spent 322 days of the past year flying from city to city.
Bingham’s air-bound life leaves him isolated from the rest of humanity, but he wouldn’t have it any other way. Soon enough, Bingham’s livelihood is at stake as his company moves toward computerized communication. Only another frequent flyer (Vera Farmiga) and a new employee (Anna Kendrick) could possibly help him get used to a life on the ground.
“Up in the Air” is a rarity; it’s a film that takes a delicate subject and brings both drama and humor into it while keeping neither emotion from becoming overbearing. The film is led with a commanding performance by George Clooney, who shows a whole range of emotion with just one mournful stare. This works well as he portrays a character who must fire people without remorse, and therefore every emotion he might ever have is trapped inside of him.
While Clooney’s acting is nothing short of fantastic here (as are the rest of the ensemble’s), this is really director Jason Reitman’s show. This is Reitman’s third feature. After “Thank You for Smoking,” “Juno,” and now “Up in the Air,” Reitman has gone three for three and proves himself as something of a force to be reckoned with. He is probably Hollywood’s most versatile young director, as he can pull off a dark social satire in just about any setting. Whether that be the halls of Congress, a suburban high school, or the corporate world, Reitman just seems to know where and when to point a camera.
Like “Thank you for Smoking” and “Juno” before it, “Up in the Air” provides the in-and-out narrator bringing the audience through the painful processes of their lives. However, “Up in the Air” lacks much of the snark of his first two films and is by far his most serious one to date.
In addition, this film shows off Reitman’s talent not only as a director, but as a writer as well. No situation feels contrived, and no dialogue goes to waste. Every line feels insightful into either the experience of Bingham, or life as a whole. The ability to be both a great writer and director ultimately shapes you into a great storyteller. Nowhere is that more apparent than in this film, especially in one of the film’s final, game-changing twists which you’ll just have to see for yourself.
Quite possibly part of the reason why I think “Up in the Air” is so great is because I viewed it as a throwback to the greatest era in American cinema: the 1970s. Like a film out of the 70s, “Up in the Air” sets its story in a socially aware context, without hammering the viewer with politicized themes.
Of everything from the 70s I can think of, “Up in the Air” feels most like a film by Hal Ashby (“The Last Detail,” “Harold & Maude”), as it contains many scenes that one could find extraneous, but which do so much to develop character. One instance I can’t get out of my head is Bingham taking pictures of a cardboard cutout of his sister and her fiance in front of famous American monuments. This serves as one of the film’s funniest running jokes, and Reitman’s ability to utilize quirky characters.
“Up in the Air” also immediately made me think of “Taxi Driver,” mainly in how similar Ryan Bingham is to Travis Bickle. One might think both characters are forced into isolation by society, but it is instead their very nature to remain isolated. Clooney does the impossible in nearly channeling De Niro’s performance, minus the murderous rampages.
What could best make “Up in the Air” perfect 70s cinema is its open-ended ending. While some just want films to give them an answer, the best ones, the ones we never forget, are those that let the viewer do the thinking. This is why we go to the movies: not just to be entertained, but to be challenged. Some movies are an escape from reality, while others mirror it. “Up in the Air” certainly falls into that latter category. Its a cinematic gem; the kind of film that brings you to terms with reality but manages to impress with impeccably good writing, directing, music, camerawork, and acting. “Up in the Air” works so well because its so satisfying in basically everything it sets out to do.
Share on Tumblr