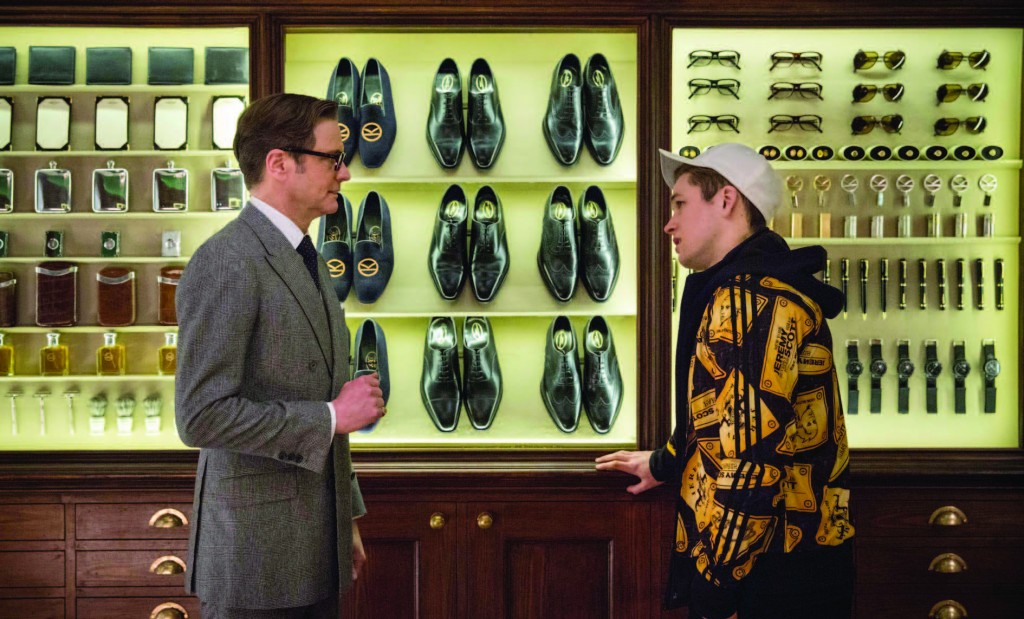 “This ain’t The King’s Speech, bro.” Image via Forbes

January and February are typically Hollywood’s dumping ground months. This is the time when studios just want you to see the Oscar leftovers that they released the last week of December. This is the time of Uwe Boll and Kevin Hart to reign. But once awards season ends, there is something refreshing about watching a movie in which nobody dies from a terminal illness. I don’t care what the groundhog said; with Kingsman: The Secret Service, summer has come early.

Kingsman is one of those movies that plants seeds and bread crumbs early on. At first, they seem pointless but later, they blossom into beautiful flowers and loafs of bread. At a young age, Eggsy (Taron Egerton) is visited by Galahad (Colin Firth), a member of the secretive Kingsmen, who are basically England’s Guardians of the Galaxy. The visit is really just to give him a secret necklace that belonged to his father. Fate will bring them together years later, when Eggsy is a delinquent dealing with a drunken step dad. You can normally catch him getting in bar fights at the pub. He is a lot better at starting fights than he is at finishing them. He is basically an Edgar Wright character transplanted into a Matthew Vaughn Joint.

I didn’t realize that Kingsman was based on a comic until the end of the movie, because this story seems like one so perfectly suited for a movie. It occupies this strange halfway zone between James Bond and Austin Powers, in that it is a farce about secret agents who could actually go face-to-face with 007. They use everything from machine guns to, in a very British fashion, an umbrella, as weapons.  This makes for a winning combination of action and comedy.

Part of what makes Kingsman so fun to watch is its inspired casting choices. If we had merely gotten the chance to see the charming and mild-mannered Colin Firth demolish a bunch of bigots, then that would have been enough. Instead, we also get Samuel L. Jackson as a villain who acts Lex Luthor but dresses like Justin Bieber. Despite how crazy and in control he is, there is a big part of him that is largely powerless, especially in the dynamic with his metal-legged sidekick (Sofia Boutella). It is a great reminder that despite how many movies and how many credit card commercial he does, Samuel L. Jackson isn’t always phoning it in. The dude can really lay an f-bomb down.

Kingsman comes from the director/writer team of Matthew Vaugh and Jane Goldman, who more than make up for X-Men: First Class. Vaughn’s directorial style will draw the ire of some and the enjoyment of others. He has an extremely nonchalant approach to violence. Heads explode and hands go flying as if these are both normal occurrences. It feels spiritually linked to Kick-Ass in that all the bloodshed would be shocking if it weren’t so funny. Vaughn’s films are never incredibly “deep,” which is a shame, especially when you’re trying to make a film that’s partially about the ethics of trying to control human population. Kingsman, like Vaughn’s other movies, is a triumph of style over substance. It is the movie equivalent of really filling cotton candy.

Occasionally, Kingsman dips its toes into meta humor. “It’s not that kind of movie,” Valentine (Jackson) says before pulling off a shocking plot twist. This isn’t some way to tear down the action genre, but rather to celebrate something that it is taking a part of. Matthew Vaughn likes to participate in a light meta humor that is more playful than savage. After all, even if the film makes some great strides to avoid plot holes and conveniences, it still rips a page out of the Indepedence Day playbook with the implementation of a computer virus. At one point, a major female character is introduced who should be the love interest. While it is great that the film takes her in a different direction, I am not sure if completely removing her from most of the action is the direction that they should have taken.

Please, don’t let that last paragraph turn you off. I am a blogger, and if I don’t find something to hate on, then my batteries will run out and I will die. I left Kingsman with a giant grin on my face that won’t go away. It proves that great action has a way of secretly getting you invested in characters and mythology. This is the kind of movie that I will probably see on TV one day. When I do, I will stop, and won’t change the channel. That is a high compliment.