Earlier this week, while reading a document for my English class, I realized something: studying theory can really suck, especially when words such as “interpellation” are used every other word. So I vow now, when discussing a comedic pop culture artifact* such as “Community,” I will do all I can to stay away from such language.

This seems necessary, especially when the story at hand is about how a pillow fight turns into war.
Last night’s episode of “Community,” entitled “Pillows and Blankets,” is a high note for a series that mainly consists of high notes. It did everything “Community” is known for doing right, and then some. Since its return from hiatus, “Community” has been on my mind lately. While maintaing the funny, the show has also delved into depths darker than any explored in its past.
Troy and Abed, the inseparable best friends, get into a major fight once they are both faced with the prospect of becoming adults. The conflict escalated last week, as the two of them built separate blanket and pillow forts, and then declared war on one another. Such a silly subject strangely seemed so sad. That’s because they’re Troy and Abed, and they hosted the cheeriest fake talk show to ever exist.
But on to “Pillows and Blankets.” It is one of the series’s so called concept episodes. This episode, which was mainly based off of either either a History Channel special or a Ken Burns documentary, turned the pillow fight that broke out in last week’s episode (which was more a sendoff on “The Lord of the Rings”) into the Civil War.
A few weeks ago, I discussed how I believed that “Community” was about the characters constantly trying to figure out their assigned roles. Even when out of typical sitcom form, every member of the study room seven acted exactly as they would have in a war. Public health major Annie took on a Clara Barton role, Jeff took on the role as mediator so he wouldn’t have to go to class, Britta acted as war journalist, and Pierce was doing everything he could to stay relevant. The episode, told partly in the slideshow form of the typical PBS documentary, doesn’t even have a single line of dialogue from Britta. However, she stole the show, with her terribly juxtaposed black and white photographs. When “Community” is imitating something, it is best at sticking to the form while throwing in very subtle jabs, such as the one that black and white does not necessarily make a photo good. Pierce’s pillow armor, which made him look like the Stay Puft Marshmallow Man, was also a nice touch.

“Pillows and Blankets” also displayed a few hilarious quotes throughout that could have been real, such as “feathers without birds” and “pajamas without children.” They include maps, with each part being named after a person (even “North” is named after a guy who’s last name is North), and a series of ever ridiculous arrows, obstacles, and retreats. No other network sitcom puts this much devotion into the little details.
All of the perfection is thanks to wunderkind perfectionist Dan Harmon. Harmon, has been in the headlines a lot lately. Unfortunately, it is for all of the wrong reasons. But after the fallout of his argument with Chevy Chase, Harmon proved himself to be as humble and self-aware as the show he created with the apology he wrote on his blog earlier this week. But more importantly, an excellent profile written on Harmon in Wired reveals perhaps the most important piece of information about the show. Harmon has been pop culture obsessed for pretty much his entire life. With all of the “Die Hard” and “Doctor Who” he has watched, Harmon studied basic story structure, and broke it down into eight easy steps: 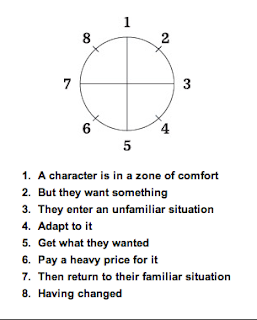 This is what Harmon uses as the backbone for every episode of “Community.” When looking over it, I find this structure to be incredibly accurate. The best part about it is how flexible it is. Every form of story, from movies, to television shows, to books, to songs, to documentaries, are all connected by this structure. That is why “Community” can have an episode spoofing Civil War documentaries, another spoofing “Hearts of Darkness,” and another spoofing “Goodfellas,” and have each one come out so perfectly. Dan Harmon, I believe, is one of the seminal storytellers of our time.
*That’s right, “Community” is an artifact.
Share on Tumblr