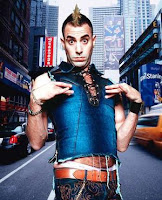 The past few weeks, I’ve had the fortune of being poured on with good news. News of a new Richard Linklater movie. News of a new Miyazaki movie. Trailers for “Where the Wild Things Are,” “Inglourious Basterds,” and “Funny People.” Now, I give you the official trailer for the movie version of “Bruno.”

Of the three characters Sacha Baron Cohen’s gay Austrian fashion designer was the least compelling (Ali G and Borat are hard to beat). But, I think a very short segment in a 30 minute show wasn’t enough time, and maybe a full length movie is what this character needs.
“Bruno” is very similar to “Borat”: Baron Cohen heads to America, in character 24/7 and ironically mocks stereotypes and exposes ignorance. The trailer looks strange, shocking, over-the-top, and hilarious beyond belief. As I watched the trailer, I remained nearly speechless as to how Cohen was able to get Ron Paul and a television talk show to fall for his elaborate scheme. Sacha Baron Cohen is by far the bravest comedian working in the field today.
“Bruno” comes out on July 10. Unfortunately, those censor-loving tyrants at the MPAA gave the movie an NC-17. Hopefully (and most likely), the movie will be downgraded to an R. It better be, because I don’t know what I’d do if I couldn’t see this movie in theaters.
Verdict: As I said, Bruno isn’t the best of Cohen’s characters; but this movie has huge potential. Hopefully, it won’t get as overexposed as “Borat” did (not to say “Borat” isn’t funny anymore. This clip still scares me).
Share on Tumblr