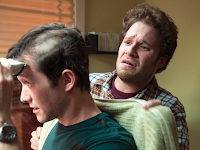 The famous cliché goes: “Laughter is the best medicine.” Humor has always been a way to cope with the inexplicable things that life throws our way. So in their first film together, director Jonathan Levine and writer Will Reiser did the right thing and madetheir cancer dramedy one about living rather than one about dying.

In “50/50,” Adam’s (Joseph Gordon-Levitt) life comes to a standstill after finding out he has a rare form of neural cancer. The needy and slightly neurotic Adam is the kind of person who avoids risk; he’s too afraid to even get his driver’s license. His fear of death paralyzes him, and his dependence on the people closest to him escalates. His go-to person is his best friend Kyle (Seth Rogen), who is not opposed to using Adam’s cancer as a pickup line. There are also the three women in his life: his overbearing mother (Angelica Huston); his girlfriend (Bryce Dallas Howard), who stays with Adam only because she feels obligated; and his young therapist (Anna Kendrick), who probably needs to sort out her own life before she can help others.

“50/50″ isn’t exactly a cancer comedy, or even a comedy about cancer. Rather, it is a comedy about how people deal with something so dire in their lives. It makes no attempts at a cheery tone and doesn’t settle for artificial characters or a soundtrack consisting of Top 40 hits. It is also a romantic comedy of sorts with its storyline of a successfultwentysomething vying for an unlikely love interest; he even has a goofy sidekick and a burdensome mother. But what distinguishes “50/50″ from the norm is that these characters feel drawn from real life and not from the typical Hollywood playbook. They function as actual, affecting parts of Adam’s life rather than caricatures put in simply for laughs.

The reason that “50/50″ feels so personal is because, through the film, Will Reiser has documented his real-life battle against cancer. Diagnosed six years ago, he has been in remission since then. Reiser bases his humor off of everyday awkward situations and pop culture references such as: “You smell like the cast of ‘The View.’” The jokes and observations laced in his script could only come from someone who came out of a situation this bad. The film doesn’t downplay the reality of such a grave situation, and the underlying current of fear and unpredictability feel all too real.

Because Reiser is writing about himself, he rightfully doesn’t pull a sympathy card with Adam. He is, like the other characters in the film, selfish and small-minded at times. Reiser’s unabashed honesty toward his own actions is reflected in Adam’s character and contributes to the sincerity of the movie.

As Adam, whose success as a radio producer comes to a halt following his cancer diagnosis, Gordon-Levitt does a pitch-perfect job of delivering some great deadpan humor and acting both self-assured and scared out of his mind. The scene in which he shaves his head, the film’s poster image, shows him bravely taking this act as a joke. In a later scene, he breaks down. The emotional outburst is more frightening than anything you’d see in a modern horror movie, perhaps because it feels absolutely right at that point in the movie.

In the supporting cast, Rogen shows how much he has matured as an actor. As the habitually loyal Kyle, who cares deeply despite his cynical outlook on life, he is the kind of friend we all wish we could have. Kendrick is another example of a cast member who is getting better and better by the film; no longer just the girl who had that really annoying crying scene in “Up in the Air.” Her character gives off an innocently funny vibe and radiates a warm presence.

Writing and acting tend to drive this kind of comedy, with the director usually taking the backseat. However, Jonathan Levine makes his presence known, and adds something to “50/50″ that few other comedy directors ever could. While someone like Judd Apatow might keep the camera totally still during a long conversation between a group of friends, Levine moves the camera around. The blurred vision of many shots makes these parts of the movie seem more like meditative talks as opposed to witty banter between friends. Reiser writes it like a comedy while Levine directs it like a drama.

In an interview with Movieline.com, Reiser remarked that when he found out that he had cancer, he and real-life good friend Rogen dealt with it through humor. He said it might have just stemmed from the immaturity of his age at the time. But making the absolute best out of a bad situation is a strength that few have. So in that sense, “50/50″ does what movies have the rare power to do: turn mortality into something both life-changing and life-affirming. If you didn’t think an F-bomb laden R-rated comedy could pack an emotional effect, then you just haven’t seen “50/50″ yet.

Check this review out here at The Daily Orange. It is also available in print form…because newspapers still exist.