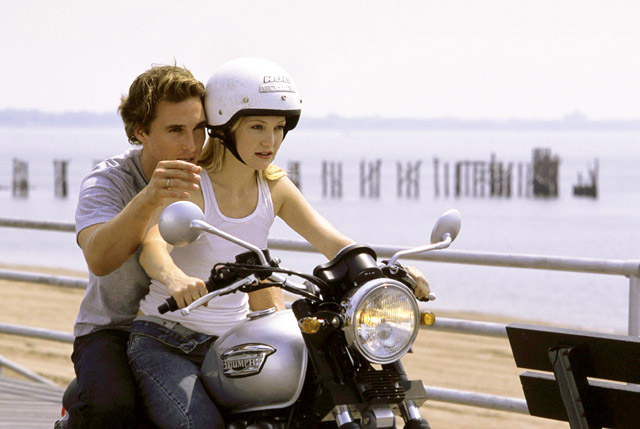 Valentine’s Day is to Romantic Comedies what Halloween is to Horror Films: Apparently the only time of the year when it is okay to talk about them. Come on, nobody wants to read about your feelings about “The Evil Dead” in July.

Some of you might already know how I feel about horror films. What you might not know is that I don’t know how to feel about rom-coms. It is a genre that I have greatly enjoyed during a few very brief occasions, and then hated on most others. It is a genre that is already a subdivision of one genre, yet there are so many subdivisions within it as well.

Rom-Coms are not as simple as they may seem. When it comes to rom-coms, I guess you can say that It’s Complicated (Thank you! Thank you very much! I’ll be here all week).

There was a time when rom-coms weren’t necessarily associated with guilty pleasures. “Annie Hall” is the genre’s undisputed champ. It is not just a love story as much as it is about the meaning of love. “When Harry Met Sally,” meanwhile, might contain a big final chase, but it is far from formulaic. That one, too, was deft at being insightful without being annoying (“As soon as you find somebody you want to spend the rest of your life with then you want the rest of your life to start as soon as possible!”). I will also include “The Wedding Singer” here, because that movie is goddamn delightful.

Then, rom-coms started to turn. I am not a historian, so I can’t attach an exact date, but it seems like it was in the early 2000s when they found a formula and stuck with it. Suddenly, they started to become something associated with just one gender. With some rare exceptions (“500 Days of Summer”), rom-coms lived in a fantasy land where a pilot would stop an entire plane so you could tell someone on board that you loved them.

Sometimes, I feel like my hatred can be a little unfounded. Maybe it is because I have never been in a serious relationship or because sometimes I am bad at expressing feelings (even though I am a generally loud person) that grand romantic gestures don’t phase me very much. Pair that with the fact that I take my film watching a little too seriously, so any cliches or actions that are completely implausible will throw me off. But I have been trying lately to be a little more open to different forms of entertainment and if watching some rom-coms means that people will stop calling me a hipster, then I am fine with it.

I have two sisters so finding a rom-com worth watching wasn’t hard. They actively encouraged me to watch “How to Lose a Guy in 10 Days.” If you haven’t seen it, here’s the basic premise: Kate Hudson plays an ambitious journalist who wants to make a man fall out of love with her in 10 days for an article. Matthew McConaughey plays an ambitious advertising executive who needs to make a woman fall in love with him in 10 days so he can nab a huge account. Of course, the two of them meet and wacky antics ensue.

Now, that is a really solid premise that feels faithful to the days of screwball comedy past. It leaves a lot of room for funny misunderstandings and third act drama. A studio executive would be stupid not to buy into this pitch. I know what will happen in the end, but I still want to see what happens when people with two contrasting goals inevitably have to fall in love. Unfortunately, it also displays everything I hate about rom-coms. People buy into rom-coms so easily, yet they exist in a sort of fantasy world where everybody is white and really successful. All of their homes and apartments look like they could belong to any character in any movie. In “How to Lose a Guy in 10 Days,” we are expected to believe that somebody owns a nice beach house in Staten Island that offers a stunning view of all of New York’s landmarks. Realistically, most buildings in New York offer a view of a brick wall.

Another big problem I have with most rom-coms is the absurd divide between the sexes. Bros just want to be bros and play poker and smoke giant cigars and watch basketball. Don’t you know that some of us have asthma? Meanwhile, the girls just want to gossip and go out to brunch all the time. To this movie’s credit, it does a pretty decent job at skewing gender politics. Hudson’s character loves steak and sports, but she has to pretend that she’d rather go to a vegan restaurant during a Knicks game because apparently that is a deal breaker for most guys. “How to Lose a Guy in 10 Days” is only self-aware sometimes. This seems like a common feature in most of today’s rom-coms. As pointed out in FilmDrunk’s excellent review of “That Awkward Moment,” that particular film was so bizarrely meta that “[the sequel to "That Awkward Moment"] is just going to be a series of zeroes and ones that you ingest via feeding tube.” Sounds about right for the fate of the whole genre.

“How to Lose a Guy in 10 Days” might not have worked if it didn’t have such a stellar cast. The reason I referred to the characters by the names of the actors is because the characters are so transparent that the actors are all I can see. That’s not necessarily a bad thing. This movie would probably be pretty flimsy if not for Kate Hudson’s hilarious hissy fit, or the fact that McConaughey has a Texas accent for no apparent reason. The two of them are funny on their own, but even better together. There are also some great supporting players. In a lot of rom-coms, the friends are just there to say “that’s a bad idea,” but the scene where Kathryn Hahn pretends to be a couples therapist is one of the movie’s highlights. Basically, rom-coms are often so interchangeable that what separates a good one from a bad one is whether the actors and actresses have chemistry.

I could get angry at “How to Lose a Guy in 10 Days” or “Failure to Launch” or “27 Dresses” or many others in the genre, but I feel like films like these teach a valuable lesson. For a hardened cinephile, sometimes a movie can actually be entertaining if you just let go of all of the little cliches. And if you are a realist, accepting the fact that rom-coms are more about what love should be than rather what love actually is, then rom-com logistics won’t bother you as much. Yes, I hate that “How to Lose a Guy in 10 Days” ends with the two leads closing down an entire bridge to declare their love for each other. In the real world, if you close down an entire bridge, then you have to resign from office.

What I am really trying to say is that if you are going to make a derivative rom-com that doesn’t annoy me, then you should probably cast Matthew McConaughey in it.

Can somebody come and save Kate Hudson’s career? Please and thank you.