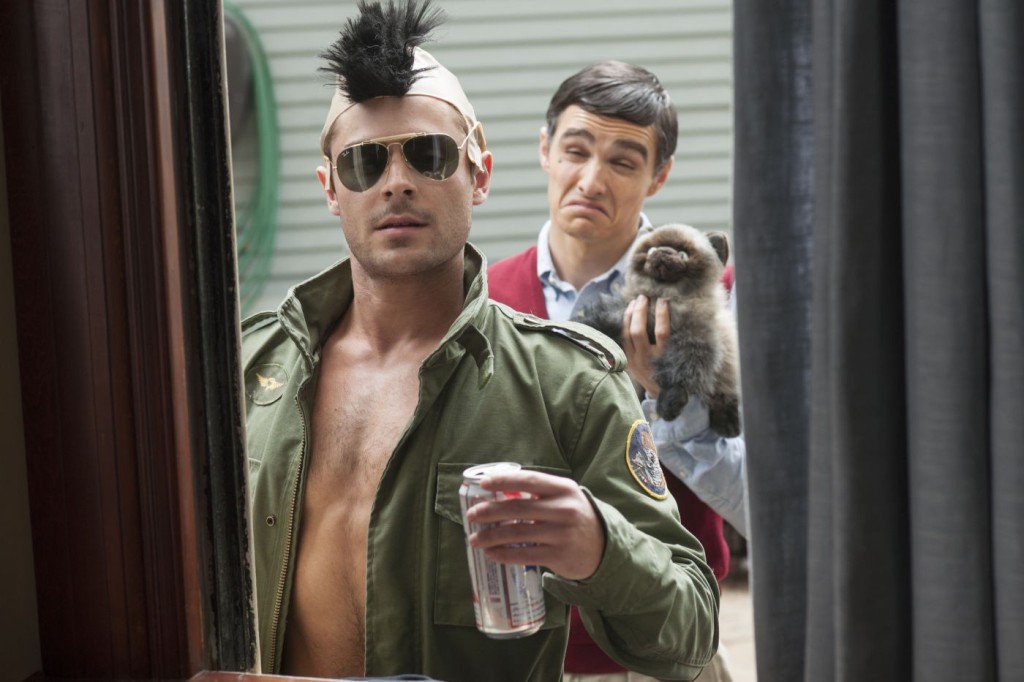 I’m still laughing at this scene. Image via Ace Showbiz

It’s a classic setup: a rag-tag fraternity goes up against their stuffy, adult neighbors. The underdog rebels go up against the establishment. However, what Neighbors wants to presuppose is: what if we are actually rooting for the adults?

Here comes Neighbors, which is the first big comedy blockbuster of the summer. It promises big laughs and gratuitous party scenes. It delivers on both these promises, but more on the latter than the former.

Neighbors is ambitious, to say the least. It throws a lot of shit at the wall, and a lot of that shit actually works. Neighbors sees Seth Rogen growing up just a little bit from bachelor stoner to stoner with a baby. Rogen plays Mac Radner along with Rose Byrne, who plays his wife Kelly Radner. The Radners are in that weird stage where they are both adults but they still feel like they are kids. I sense a theme emerging.

Just as the couple is starting to get used to their boring suburban life, a fraternity moves in next door. The brothers we will come to know the most are Teddy (Zac Efron) and Pete (Dave Franco). We know that Teddy is a meathead because he always has his shirt off, and we know that Pete is smart because sometimes he wears glasses. The two of them are also trying to hold on to the last days of their youth.

Now, I know that last paragraph sounded abrupt, but that’s because it all happens very abruptly in the movie itself. At one moment, a gay couple is looking at the house next door and then suddenly, a bunch of fraternity brothers are already moving all of their stuff in. The biggest problem with Neighbors is that it rushes through every important plot point as quickly as possible and it never gives its story any time to breath. Neighbors is a comedy that relies heavily on its plot, yet it seems more interested in moving from one penis joke to the next.

There isn’t necessarily anything wrong with that. Randomness and chaos can make a comedy great. However, something like Neighbors should be focused more on the latter than the former. Something like Step Brothers, which is, no joke, one of the best comedies of the 21st century, can be as random as it wants because it never really claimed to have a plot. When you do something like Neighbors, which borders on some form of high concept, you have to commit to the story you laid out for yourself. One of the biggest problems with Neighbors is that it wants to have it both ways. It wants to be both an Apatow comedy and an 80s comedy where a bunch of slobs challenge the establishment. When you try and have it both ways, you end up defeating yourself.

This is not to say that Neighbors is a failure as a comedy. When it works, it really works. There is one scene depicting a parade of Robert De Niro impressions. Part of this scene is already in the trailer, but that doesn’t make the actual scene any less funny. Maybe the funniest part of the whole scene is that there is a Jackie Brown reference in it. But really, the best part is watching Dave Franco claim to be “Robert De Niro from Meet the Fockers” as he spouts out quotes from Meet the Parents. Neighbors does pop culture references better than a lot of comedies I have seen in a while.

Then, next to some of the smarter jokes, there is a lot of broad slapstick humor. A lot of it works very well, such as a climactic fight between Seth Rogen and Zac Efron that uses objects in the room masterfully. Then, there are parts like the airbag joke, which would have been a lot funnier if they spread it out and built up to it. It also would have been funnier if they didn’t play that same gag on TV every ten minutes.

Neighbors is good, light summer entertainment. It is worth many laughs. However, it is unfortunate when you think of the wasted potential. It is constantly at odds with itself about whether it wants to be stupid or smart. In that mix, you have a lot of funny and charismatic people trying to figure out what to do with themselves. Neighbors is not a bad movie. In fact, at times, it is a very enjoyable movie. Yet, in the end, it feels less like a movie and more like a collection of side gags looking for a more complete comedy.