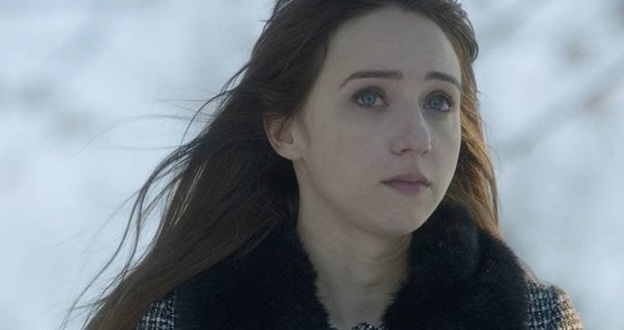 Maybe In Your Eyes could have used some of that complex thinking, because it never escapes its simple premise. The two connected people are a man and a woman, so you know they have to fall in love, because plot conventions. The two of them are polar opposites. Rebecca Porter (Zoe Kazan) is a Manic Pixie Dream Girl from New Hampshire who is unhappily married to a doctor. Dylan Kershaw (Michael Stahl-David) is a Tim Riggins-type ex-convict from New Mexico who just wants to redeem himself and live off the fat of the land. The whole movie is two seemingly different people having phone conversations with each other through their brains.

And that is it. Through their conversations, they butt into each other lives and try to sort each other’s problems out. It never gets out of this rut. There are a little subplots or side actions to lift the film up any further. There is nothing wrong with having a simple premise to start off with. However, what matters most is what you do with that premise. In Your Eyes believes the only way that this story could only be a romance. There are so many more opportunities. There was so much unsaid and unexplored in this film. In Your Eyes could have transcended its premise. Unfortunately, it doesn’t even try to.

It seems odd that this film comes from the mind of Joss Whedon, who has used the past two decades to create his own unique brand of science fiction and blockbusters, which ranges from Firefly to The Avengers. Maybe the real problem is director Brin Hill. Hill’s previous credits as a writer and a director include Battle of the Year and Won’t Back Down, which makes him an odd choice for this film. I am not sure what Whedon saw in Hill, as In Your Eyes does not include the amount of dancing and Nick Cannon that he would normally be used to. In Your Eyes doesn’t have much of a distinct voice, or a grasp on its own story.

In Your Eyes feels less like a professional feature and more like a freshman year film school project. Had this been the product of film school, it would have gotten a very good grade. Because this is the work of people who have worked in the industry for many years, the film’s failure feels all the more strange. There are a few bright spots, though. Once Rebecca and Dylan begin to open up to one another, they have a few very nice moments. But then, they just go back to being tropes instead of characters. In Your Eyes is an interesting experiment in some ways, but it feels more like watching someone try and make a movie as opposed to an actual movie.