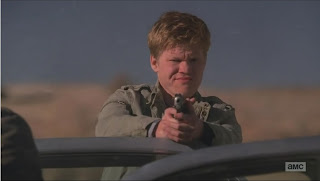 This is a recap of episode 13 of season 5 of “Breaking Bad.” The episode is “To’hajiilee.”

Walt has spent the past five years (real time, not “Breaking Bad” time) outsmarting everyone he knows. It turns out though that Walt’s ego, the same thing that’s always helped him get out of trouble, could also cloud his judgement. Finally, the joke’s on him.

Only on “Breaking Bad” could a cathartic moment suddenly be turned into one of fear and pain. When Walt finally got handcuffed, it felt like a moment that was long time coming, which is probably why this episode alluded to the pilot so much. Of course all the hurt happens under the direction of Michelle MacLaren, who’s directed some of the show’s most twisted episodes. And hopefully once “Breaking Bad” ends, she’ll become a fine movie director, hopefully funded by Megan Ellison.


I don’t know if Walt has gotten dumber, or if we the audience have gotten to know him so well that we can officially figure out his every move. Or, as Bryan Cranston said on last night’s episode of “Talking Bad,” Walt has gotten less scientific and more emotional. Yet, Walt still doesn’t understand how those emotions work. Sometimes, he doesn’t know when to use these emotions to call off a hit.

Speaking of emotions and lack thereof: Todd. Todd is secretly the most evil bastard on the show, and even he doesn’t know it. He is what somebody smarter than myself would call a sociopath. But maybe he can experience love, as it looks like the man who once chased after Tyra in the “Friday Night Lights” universe wants some of that sweet blue jacket action from Lydia. I don’t think he’s going to get it though, even if they can improve the meth formula. Todd and his gang claimed to have “burned” the batch thus not giving it its distinct blue tint. Apparently, the people who buy up the product abroad find this to be a big selling point, like a marketing tool. Its funny because in the real world outside of “Breaking Bad,” blue meth has become an important marketing tool for the show. People go out and buy bags and bags of “blue meth candy” that probably tastes awful.

But back to the episode. Lydia still annoys me more than any other character on the show who has ever annoyed me, but I feel like we are going to see something come out of her completely unexpected during the last few episodes. Perhaps she’ll have to put out a hit on Todd and his neo-Nazi family and she’ll do the dirty work herself. She seems like somebody who’d be careful, methodical, and remorseless at a job like this. So, maybe she and Todd would make a good couple.

The episode brings us to Todd and his camp leading up to the moment from last week when Walt called Todd about a little job he had, which was a nice little wrap around. Then it was back to the dream team of Jesse, Hank, and Gomie. Gomie might be by-the-book, but he takes his work seriously and isn’t afraid to show when he’s pissed. I’m pretty sure I heard him call Jesse “Timmy Dipshit” for his move at the end of the last episode. This was a slower episode than usual, but by the end, it all made sense that were watching Jesse pull off a long con. Finally, Jesse was the one pulling the strings.

Jesse suggested that they needed hard evidence to bring Walt down, and the only evidence of Walt’s crimes are the barrels buried in the desert. Jesse and Hank were all about the fake pictures tonight. First, they used a fake brain to get Huell to admit where the money was. By the way, Huell made the saddest face after Hank and Gomie left him and told him not to leave his house. I’m surprised there was no scene in the closing credits with Huell still sitting on the couch, waiting for somebody to let him go. Man, maybe he should have just gone to Mexico with Kuby.

Walt, meanwhile, takes the easiest possible way out by looking for someone to take Jesse out. In the scene in which Todd’s uncle asks Walt for information on Jesse, Walt doesn’t even seem to know anymore why he wants Jesse dead, just that he needs him dead. This is reminiscent of Walt’s current state: there’s no passion left in his work, just a need to tie up loose ends. However, there is a chance for that passion to come back, as Walt was offered a new cook job by the neo-Nazi gang. Walt means it when he says he is out of the business for good. On the other hand, I’m sure Walt wouldn’t mind being crowned the meth king once again.

How though, did Walter fall for Jesse’s trick barrel photo? Nobody else knew of the location of Walt’s money. I also would disparage Walt for not thinking about the fact that his call is possibly being recorded, but he had no idea Jesse was working with Hank. Walt thinks Jesse is a lot of things, but he never thought he could be a rat. That’s probably why he shouts out nearly every person he has murdered over the phone, letting Jesse know that most of the bad things he did were to protect them both. In that moment, I sincerely thought Walt was also going to blurt out “also, I killed Jane.” That’s a confession still waiting to happen.

There are many “Breaking Bad” episodes that manage to move slowly, but completely redeem themselves within 10 minutes. That’s what this week’s episode was, as “To’hajiilee” brought us back to the very first episode. Walt got arrested in the place his crimes began, a full circle. The episode really picks up when Walt hides behind a rock as he waits for Hank, Jesse, and Gomie to pass. The most perfectly framed shot in the episode, and perhaps one of the best in all of “Breaking Bad,” is that closeup of Walt’s face as Jesse’s voice echoes in the background. That voice doesn’t just pain Walt in real life, it is deep in his subconscious, and the pain it causes him is so apparent.

Still, Walt tries to argue that everything he is doing is for his family. At this point, it’s no longer justification and more like deflection from blame. You can’t lock me up, because I have a family to take care of! You can’t take the millions of blood dollars I made, because it’s for my family! This makes me think of my source of all wisdom, “Kill Bill”: “just because I have no wish to murder you in front of your daughter doesn’t mean that parading her around in front of me will inspire sympathy.” Mr. White, we love Walt Jr. and Holly but that doesn’t mean we don’t want to see you pay for your crimes.

But Walter gives up, and in doing so, he calls off the hit on Jesse. His last fighting words before being taken away are “coward.” Something that got to me in this scene was seeing how cocky Hank was as he taunted a defeated Walt who sat handcuffed in the back of the car. Like I said last week, Hank might be the good guy of “Breaking Bad,” but he is not necessarily a good guy. He’s got an ego to fulfill, and definitely some thoughts of revenge as well. Hank pays the price for this when Todd and his uncle show up with a whole gang to foil the arrest. This scene has been controversial. Why do they show up anyway? Every time there’s a little victory on the show, Vince Gilligan loves to yell “surprise!” and screw up our good time.

“To’hajiilee” concludes with a hell of a cliffhanger. It leaves in mid-action. Somebody is probably going to die now, but it leaves us with no indication as to who. Or maybe the more tragic part about is that we know Walt will definitely survive, thanks to those flash forwards. Once again, I see a connection to “No Country for Old Men”: Walter White is Anton Chigurh. Like Chigurh, he is a grim reaper figure who manages to walk out of every horrific incident he gets into unscathed. He will then be forced to walk the Earth, as a reminder that evil will always exist in the world. I’m getting dark here, but my point is that only fate (cancer) can kill Mr. White at this point.

Until next week everyone, Keep Calm and Tread Lightly.