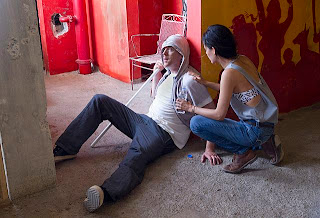 This is a recap of episode three of season three of “Homeland.” The episode is “Tower Of David.”

Most chatter about “Homeland” nowadays is marked by debate on whether or not the show is good anymore. Rarely have I seen a show fluctuate between great, okay, and horrible so often, and sometimes just within the span of a single episode.

“Tower Of David” is not the best episode in the short history of “Homeland,” but it is definitely one of the most different hours that the show has done. This was the least politically driven episode in a while. To prove how far away it would be going from Washington politics, the episode opened with a sunny beach that might as well have been stolen “Lost” B-Roll. After a bunch of men spoke Spanish (with no subtitles to be found), a bloody and dying Nicholas Brody pops back up. America’s favorite sleeper cell agent is finally back!

Brody has become a former shell of himself. Now bald, he looks like a shriveled up Bruce Willis. He’s been away from the light and loves of his life for far too long. He’s shot for a still unknown reason and brought to a towering, dilapidated building in Caracas. There, he is healed and given a lot of heroin in lieu of, er, traditional painkillers.

Brody’s new home is named the Tower Of David, not in the Biblical sense but rather after the man who died and never finished building it once Venezuela’s economy collapsed. Now, it has become a place for criminals and squatters. Yet, it is a vibrant place in an even more vibrant city. “Homeland” has never stood out for its cinematography, but the contrast between the lively Caracas and the drab bureaucratic institutions that these characters usually inhabit is hard to miss.

The building is captured in a pull away shot which has an incredibly cinematic scope to it. Once again, Brody is trapped. It seems like most of his life has been spent in prisons, whether it be in the Middle East, South America, or his own home. Indeed, the Tower Of David felt a lot like Abu Nazir’s prison: a place that is obviously dangerous, yet Brody is already a little too comfortable in it. Just like with Nazir, Brody is given another young child. Father figure/Stockholm Syndrome part two is about to commence.

The world of “Homeland” already deals with a lot of real establishments, so there is little room for imagination. I would not mind finding out more about the history and people of the Tower Of David though. More backstory seems necessary, as I am still unclear of the intentions of the men who plan to keep Brody safe by holding him hostage. Clearly, they don’t plan on cashing in on the huge reward that’s currently out there for Brody’s head. They know Carrie, so perhaps she hired them to keep him safe?

If Carrie is the mastermind of Brody’s currently situation, she clearly has no more control as she remains institutionalized. Carrie is back on lithium and is losing control of her grip on reality. After cursing him out in a moment of sad triumph last week, Carrie can’t wait any longer for the return of Jewish Santa. However, Saul never shows up. Carrie’s presence seems like a mirror to Brody’s imprisonment. In a strange way, the two of them really are kindred spirits. I think there was more to their attraction than just the element of danger. Still, I think this episode would have been even better as a self-contained hour that was only set in Caracas. The Carrie plot line seemed a little abrupt. The episode I am picturing is a mini television masterpiece. But if I keep trying to write for a different show, then I might as well give up on the version of “Homeland” that actually exists.

Maybe its just that the vivacious and unpredictable new setting was exactly what “Homeland” needed to get its groove back. This is a place where you can get thrown out of a window for stealing something and “keeping the peace” is the justification. Brody is being put under intense psychological torture. Feeling unsafe, he follows Muslim chants and seeks shelter in a Mosque. This solace doesn’t last long before the Tower Of David crew comes in guns blazing and shoots the peaceful Muslims and two police officers who were about to take Brody into custody. When “Homeland,” is at its strongest, it is willing to rewrite its own rules at any time. Neither the characters nor the audience are in a state of complete comfort. For some situations, it is more interesting if there isn’t a political fixer/PR wiz to cover it all up.

For the majority of the episode, Brody remains in the care of the creepy lizard doctor. The doctor seems like the kind of person who would probably conduct some crazy scientific experiment and then try to kill Spider-Man. Anyway, the doctor doesn’t even feel real at times, he feels more like a figment of Brody’s overbearing subconscious. Towards the end, he tells Brody that he is like a “cockroach,” as he is always able to crawl out of disastrous situations completely unscathed. Brody will be there at the end alone, watching the world burn from the slums. Brody has lost his family, his secret lover, and his religion. All he has left to comfort him now is a hypodermic needle filled with heroin. In a short span of time, Brody went from war veteran to junkie fugitive. At its core, “Homeland” will always be a story about tragically flawed heroes and villains.