“The Prestige” follows the same vain as films such as “Sunset Boulevard” and “American Beauty” and uses a narrator who speaks from beyond the grave. Robert Angier (Hugh Jackman), an American magician, begins the film by being murdered by rival British magician Alfred Borden (Christian Bale).
From there on, the film flashes between many different points in time. All of the jealousy and obsession between the rivals is revealed to show how it all leads up to the film’s deadly conclusion. If you think I’ve given away the whole plot just because I revealed the ending, you don’t even know the half of it.

“The Prestige” is the maximum potential greatness that “Inception” could’ve been if it had a stronger screenplay. While “The Prestige” might not have had the budget or effects of “Inception,” it is an underrated gem that outshines it simply for its story.
Writing is a small factor that matters much more than most people realize. “The Prestige” has just about as many twists and complicated layers as “Inception,” yet it handles them in a much clearer way. “Inception” was like a puzzle where you were given the pieces, but had no clue what they were supposed to create. “The Prestige” is like a puzzle where you know what it wants to create, you just have to figure out how to piece it together. This is not meant to speak ill of “Inception,” simply to try and understand why “The Prestige” fell so under the radar.
Like the characters in every single one of his films, Nolan is something of an obsessive. That helps give way to his strikingly accurate image of England in the 1800s. He also obsessively strives to make magic and the world of magicians not just performance, but art. Nolan puts the magic back into magic, which was taken away intentionally by Gob Bluth in “Arrested Development” and unintentionally by “The Illusionist.”

In the world of “The Prestige,” magic doesn’t just involve a straight face; it requires the magician to be intelligent, innovative, and artful. Magic tricks should actually be magical. Although in this world, some of it could actually be real.
As for the acting, Jackman shows he is not quite as world class as some of his co-stars, but he is certainly trying his best. Bale meanwhile, is as wildly spot-on as always. Even in moments that seem genuine, he is always projecting a dark underside that is just waiting to be revealed at every moment. That is what truly makes Bale such a great actor: his unpredictability.
Nolan favorite Michael Caine also starts in “The Prestige” and for the first time in years, he plays a large, incredibly vital part of a story. While he usually plays the nice old mentor who helps the hero out, in “The Prestige,” his role is less good and much more ambiguous. None of the characters in the movie would function without him. Also, for the sake of getting my hits up on Google, I thought I’d mention that Scarlett Johansson is also in this movie. 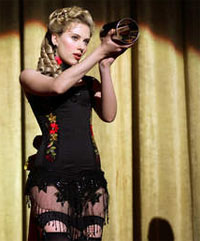 “The Prestige” reminded me of the recent “Black Swan,” mainly in its final twist. Like “Black Swan,” it pulled off an ending that could’ve been guessed and still makes it both shocking and exciting. Even if an end twist is obvious, it can always be good as long as the filmmaker isn’t pretentious about it.
Some might call Nolan a modern day Spielberg for his ability to convert smart ideas in huge blockbusters. “The Prestige,” meanwhile, is Nolan at his most Hitchcockian. Everything about it from the perils of obsession to the way the twists and thrills are laid out would make the British master of suspense proud.
“The Prestige” takes a genre that was stretched to its end and makes it fresh and captivating again. “The Prestige” is the best kind of psychological thriller: it actually makes you use your brain to enjoy it.
If You Liked This Movie, You’ll Also Like: Black Swan, Fight Club, Inception, Memento, Moon, There Will Be Blood, Vertigo