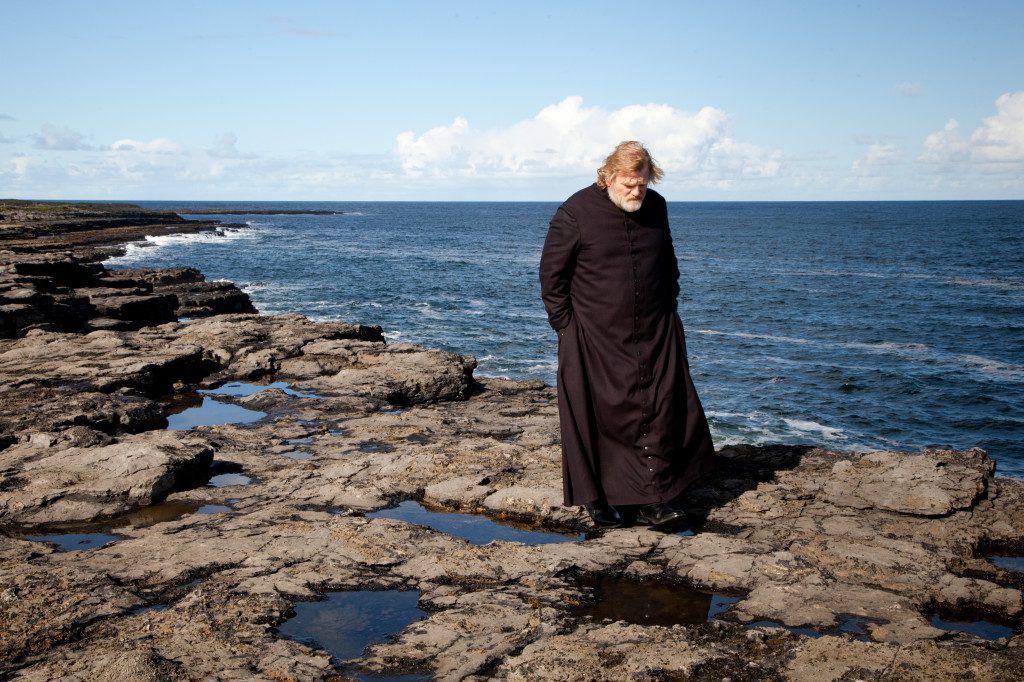 Here is a joke I just thought of: what’s the difference between religion and astrology? Religion has the potential to actually have an impact on the world.

Okay, so it’s not a great joke, but I hope you get the point I am trying to make.

Calvary, a parable or an allegory, whatever you want to call it, is a dark exploration on the failings of the church, with an extra serving of melancholy. It stars Irish national treasure Brendan Gleeson as Father James, a good priest who receives a death threat in the film’s opening minutes. In confession, the voice on the other side tells him that he will die in a few days time for the sins of other priests. This means everything from greed to pedophilia. Already, Calvary is making you think about the things you didn’t want to think about.

Calvary is set in the kind of rural Irish village that would normally be ruled by the church. Here, the sanctuary of choice is either the church or the pub. Lately, people seem to be gravitating towards the pub. Now, Father James is a bit of an unorthodox clergyman, in that he has a daughter (Kelly Reilly) and he doesn’t really have all the answers. But it’s Brendan Gleeson, so you trust him anyway.

Despite its somber nature, Calvary still boasts an eclectic cast of characters that spark up humor hear and there. At its best, Calvary feels like a slice of life on the Emerald Isle. Because this is an allegory, it is important to take a lot of the plot details with a grain of salt, in that everything that happens probably represents something else. The murder of an animal is probably as symbolic as the murder of a man. Chris O’Dowd’s beard could represent the wrath of God.

This is the second feature from John Michael McDonagh, who last made the much lighter The Guard. After he gets a few more films under his belt, he is definitely on his way to being a great filmmaker. His subtle displays of wit and self-awareness are always amusing (“how’s that for an opener?”/”how’s that for a third act revelation?”). Calvary is ambitious in scope (Ireland has never looked this bleak or this beautiful) and yet, it sort of sets itself up for failure with its story. At the beginning, Father James is told he will die on Sunday. The film is structured around the week leading up to this day, and thus, it often moves at a snail’s pace. With a very structured timeline and the promise of a showdown, Calvary could have been the Irish version of Friday. Wishful thinking. Perhaps one of the film’s biggest flaws is that it conceals the identity of Father James’ foe until the very end. Revealing it earlier on might have actually raised both tensions and the stakes.

Calvary might sometimes come off as cold. But then again, being Irish and keeping feelings bottled up might appear to go hand-in-hand. Calvary is an entertaining sophomore slump from a very talented filmmaker. Perhaps what might make it worth seeing, though, is the towering performance from a still underrated character actor.

Okay, time for me to go study up on Christian theology now.