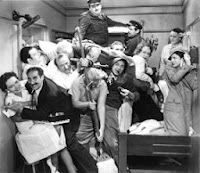 A Night at the Opera


As today is Christmas, I almost considered making this a cheat day and recommending multiple Christmas classics. However, “A Christmas Story” runs for 24 hours straight, and almost everyone has seen “Elf” at this point. Instead, I decided to dig back really far and pull out a Marx Brothers classic from 1935.

Any Marx Brothers movie could have made this spot, but “A Night at the Opera” manages to stand out. “Duck Soup” could have made for the mirror scene alone and “A Day at the Races” for the scene in which they try and be doctors. However, nothing beats “A Night at the Opera” in both its wit and its slapstick. The four Jewish brothers from New York City got their start in vaudeville before hitting the big screen and bringing their crazed theatrical antics along with them. Comedy would never be the same.

The end of the silent era allowed comedians to make movies that portrayed humor not just through bodily movements but also through dialogue. The Marx Brothers were masters at wordplay, and Groucho was truly Hollywood’s first smart ass. The scene in which Groucho and Chico start tearing up the parts of a contract they don’t agree with (“there ain’t no sainty clause!”) is masterful at both types of comedy.

Of course, the highlight of this movie is a miracle of slapstick: the stateroom scene. Characters keep piling and piling on into a tiny room as they keep ordering more and more hard boiled eggs, until someone opens a door and everyone falls out. It is not necessarily the part where everyone falls out that is so funny, but the ensuing madness, and the question of how many people can possibly fit into this room before the inevitable collapse. Sometimes, it is the telling of a joke, and not the eventual punchline, that can be funniest.

“A Night at the Opera” is a comedy that is truly timeless. To entertain people for over seven decades for is a rare gift that only the greatest of comedies can provide. Here is something that both you and your grandparents can laugh at together.