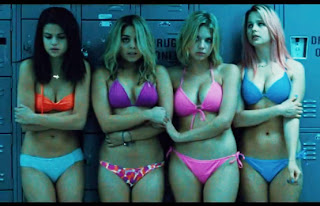 “Spring Breakers” walks like art. It talks like art. But it is not art. It is a scatter-brained collection of pretty colors and hot bodies disguised as art. Or maybe it is art and you just don’t get it, man.

The reason I just didn’t get “Spring Breakers” is that there was nothing for me to get. There was nothing to cling onto or explore deeper, and there was even less to be entertained by.
“Spring Breakers” follows four sheltered college girls from Kentucky. Their one real dream is to go to Florida for a real spring break experience. The problem is, they have no money. So, out of nowhere they decide to rob a store. They make off with a big enough score that they can have their spring break in a state that is mostly occupied by criminals and old Jews.
I do not understand why stealing the money is their only option, or even why they don’t have money in the first place. To say that most of these characters are caricatures is an insult to caricatures. The cast is made up of a bunch of a bunch of former tween idols trying to play against type. Vanessa Hudgens, Ashley Benson, and Rachel Korine (wife of director Harmony Korine) might as well be the same person. They never have any thoughts independent of one another. Their conversations vary between “yay spring break!” and “woo spring break!” and “I wanna put this money in my [REDACTED].” Surprisingly, The only one of the main girls who actually stands out is Selena Gomez. While her work is nothing amazing, she gives it her all. She is the only one I could connect to at all. However, her name is Faith. And she likes to go to church. That defines the film perfectly.
Once the girls get to Florida, “Spring Breakers” turns into the dullest extended party montage I have ever seen in a film. “Spring Breakers” is like “Girls Gone Wild” directed by Oliver Stone. It is almost like the Mardi Gras sequence in “Easy Rider,” but without the strong story, characters, or social context. The girls drink and smoke out of any object possible, and snort coke off of every part of their bodies, because that’s what college kids do I guess. They get themselves into trouble one night and end up in jail. Maybe the film’s only truly funny moment is when the four of them stand in a courthouse wearing just their bikinis.
They are eventually bailed out of jail, for reasons that still make no sense at all, by Alien (James Franco), a rapper who “just wants to be bad” and lives out his dream with a massive weapon collection. Under Alien’s supervision, the girls get involved in the seedy Florida underworld, and they become pretty good criminals. James Franco is phenomenal in this part that the strange little pockets of Oscar buzz for his performance now make sense. Sometimes, Franco seems like he is sleepwalking through a lot of his roles (the guy is busy and he doesn’t sleep a lot). As Alien, he is fully committed, and he forms the most fully fleshed out character in the film. The reasoning behind Alien’s rap persona and his desire to be a criminal are interesting enough that he deserves his own film. Preferably, Harmony Korine would not direct that film.
“Spring Breakers” is more migraine than movie. Seriously, there should probably be an epilepsy warning before it starts. Harmony Korine enjoys cutting quickly from scene to scene or sometimes cutting out in the middle of an important scene to somewhere else that is completely inconsequential. “Spring Breakers” tries to do too much and therefore it is impossible to get anything out of it. I am not sure if Korine does this because he thinks it creates an interesting narrative, or because he is hiding the fact that he never had a strong narrative to begin with. I am shooting for the latter.
My ultimate conclusion is that there really was no point to “Spring Breakers.” There is something very voyeuristic about the way the film captures spring break, and it feels mostly like voyeurism for the sake of voyeurism. Spring break footage from an MTV reality show would have more personality than what Harmony Korine captures here. “Spring Breakers” seems to think that style and personality go hand-in-hand. In order to have depth, there should at least be a few characters with some kind of backstory or motivations to be involved in. Throughout the course of “Spring Breakers,” some characters disappear and others die, and yet the film just moves on.
“Spring Breakers” was one of the most divisive films of 2013. For me, it was one of the worst. Most bad movies are at least honest about their intentions. “Spring Breakers” tries really hard to pass itself off as artistic. However, I am pretty sure that the actual script was five pages long and then 90 more pages of stick figures with boobs.
Brain Farts From The Edge
Share on Tumblr