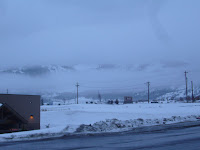 My third day at Sundance started very, very early Friday morning; or maybe really late Thursday night (Not sure, my perception of time has been warped thanks to the two hour time difference and “Lost”). The day started with a late night/early morning screening of “Dare.” Despite the fact that I only got four hours of sleep following the screening, it was worth it. “Dare” is so far, and may end up being in the end, the best film at Sundance. “Dare” follows around three teenagers from Philadelphia as they go through their last semester of high school. The three kids are the good girl, Alexa (Emmy Rossum), the lonely outsider (and Alexa’s best friend) Ben (Ashley Springer), and the jock Johnny (Zach Gilford). The film is told in three segments, each segment focusing on one of their lives (but tying into the lives of the other two) and showing how each character goes from blissful innocence to painful maturity.

The film works as an extremely accurate portrayal of teen angst. It is very honest and manages to be both funny and tragic at the same time. While each of the three acts focuses on all the actors, each act does a great job of focusing on one of the single characters and going deep into their mind. Each character goes on a different journey, but the emotions they feel are relatively the same.
After the movie ended, the cast and crew held an extremely informative, and very explicit, Q&A. Director Adam Salky explained to me his many influences for the film, one being his own life and another being “Y Tu Mama Tambien” (funny, because I thought of that comparison in my head as I watched the film). The “Y Tu Mama Tambien” aspect is from the film’s exploration of confused sexuality. “Dare” was originally based on a short film that the writer and director did together that involved only Ben and Johnny–the character of Alexa came later on. Rossum didn’t even have to read the script to know she wanted to do the movie. In order to prep the actors for the movie, Salky and writer David Brind got the actors to bond with each other and worked with each of them individually. It helped the actors work together easier and it shows in the fantastic chemistry they show on screen.
Next, I went to an early screening of “We Live in Public.” It is a fascinating film about the beginning and the future of the internet told from the story of internet pioneer Joshua Harris. As a note to my readers, Al Gore didn’t invent the internet, this guy did. Harris helped start up the internet and did many “projects” where he explored the use of cameras invading people’s private lives as a metaphor for where the internet is going and how it will eventually take over our lives. He showed that soon we will be able to display live every aspect of our private lives. He did this experiment in 1999, years before the creation of Facebook and Video Chat. Harris single-handedly predicted the future of technology.
Unfortunately, low stocks on the internet and Harris’s excessive spending caused him to loose his fortune. He now lives a private, happy life in Ethiopia. Harris attended the screening today and continued discussing his ideas on technology and plans for the future. As the director put it, this movie is “the story of the greatest internet pioneer you’ve never heard of.”
In the evening, I went to see “Humpday.” It has received lavish praise from audience members and critics alike. My take? Although the movie contains hilarious dialogue, fantastic acting, and a pretty daring story, the movie as a whole was just meh. I was entertained but there were pretty long stretches of the film where pretty much nothing happened and I just waited for something exciting to happen.
“Humpday” is the story of two best friends from college. One has settled down and married, while the other is still single, exploring and okay with one-night stands (these two characters seemed very similar to the main characters of “Vicky Cristina Barcelona”). When free spirit comes to visit married man, he convinces married man to participate in an art project of his for an upcoming film festival. The project? A porno about two straight men having sex. Yes, this premise is strange and funny, but it doesn’t really go as far as it could with all the material it had.
Once this movie ended, the cast and crew stepped up for a Q&A. As they conducted this Q&A, my appreciation for the film began to heighten a bit after finding out how it was made. The story involved much improvisation. The cinematographer stated that when dealing with the actors the crew decided to “back off as far as we could and let them do their thing.” This worked, because it let the actors work together and create backstories for the characters and ultimately a high level of believability in what could have been such a ridiculous film.
Before today, I’d already seen multiple movies at the Festival. While they can be considered independent, “Paper Heart” and “Spring Breakdown” were already on the radar and contain big name stars. They do not fully constitute as indie films. The three films I saw today were true indie films. They were filmed on microbudgets, contain few stars, and came to the festival just hoping anyone would pick them up. It was skill, not star power, that would bring them good luck and success.
While watching these three movies today, I realized the true difference between an indie and Hollywood film. Anyone of the three movies I saw today could’ve been a big Hollywood film. However, while the purpose of a big studio film is solely to tell the story, the purpose of the indie film is to show the journey and not just the destination. “Humpday” looked nothing like a traditional Hollywood sex comedy, as it contained short snippets of no dialogue or a character simply traveling from place to place. “Dare” used different colors and camera techniques to portray the mood of each characters’ story. These small nuances usually don’t make it into major blockbusters. Even as big studios try to pass of works as character driven and awards worthy they still lack this distinctive quality that only an independent filmmaker can pull off.
Share on Tumblr