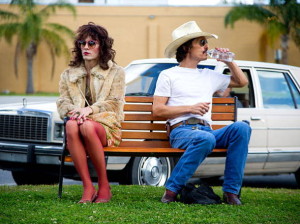 Because it is Oscar season, that means that by Constitutional law, there must be at least one movie about homophobia and AIDS. “Dallas Buyers Club,” an interesting and important true story that deserved to be made into a film, does just that. While it stumbles sometimes, it works exactly when it needs to.

There are a lot of boobs and a lot of rodeos in “Dallas Buyers Club.” But the film also has a lot of heart, and there is absolutely no nuance as to who is the good guy and who is the bad guy here. Based on a true story, “Dallas Buyers Club” is set in the year 1985, fittingly not long after Rock Hudson‘s death from AIDS. Ron Woodruff (Matthew McConaughey) is an electrician some of the time, and a hustler for the remaining amount. His bad habits lead to the discovery that he has HIV. Given his fervent homophobia, he doesn’t immediately take too kindly to this news.

Woodruff doesn’t give up easily. After all, this wouldn’t be a movie if he just decided to lay down and die. It turns out that the medication that the doctors give him and other AIDS patients doesn’t actually work, so he decides to get better treatment through illegal means, and by that I mean that he listens to the first doctor that he meets in Mexico. Never one to resist good money, Woodruff illegally distributes the helpful drugs from over the border into the hands of suffering AIDS patients in America. He does a good thing while simultaneously becoming a very rich man.

Along with “American Hustle” and “The Wolf of Wall Street,” “Dallas Buyers Club” is part of a trend of American films that came out in 2013 about the lengths people will go to just to make it to the other side, preferably with a lot of cash in their pockets. The only difference here is that “Dallas Buyers Club” feels absolutely no ambiguity as to who was on the right and wrong side of history. For those who know very little about government bureaucracy and the FDA’s history with AIDS, “Dallas Buyers Club” will be eye opening. For those who already know the story, it won’t make you want to go out and protest anymore. In fact, much of the jargon between doctors makes up for the weakest parts of the film. While it is interesting, it is often a little bland, and it just means less time that gets to be spent with the film’s standout stars.

After watching this film, all of the Oscar hype surrounding McConaughey makes absolute sense. The guy isn’t so much giving a performance as he is giving a commitment. With that loud, proud 80s mustache, he looks like a gaunt Brian Fantana who’s had all of the confidence and Sex Panther drained out of him. It is one thing to endure a physical transformation and shed a lot of weight; it is another thing entirely to convincingly embody the emotional state of having literally nothing less to lose. Woodruff isn’t even likable from the get go, as he is incredibly homophobic. Then, when he pulls over in his car and desperately bursts out in tears, you want to cry with him. “Dallas Buyers Club” is partly about watching somebody crawl out of denial and then just keep on livin’, man. L-I-V-I-N.

The other highly praised performance in the film is Jared Leto’s work as Rayon, an AIDS positive transgender woman who becomes Ron’s business partner. As much as Jared Leto seems like a real-life “Entourage” character, his talent, as well as how selectively he chooses his roles (past films he has been include “American Psycho,” “Fight Club,” and “Requiem for a Dream”), is outstanding. His performance never feels tasteless or Oscar begging because the character is both genuine and undeniably flawed. And if only there was an Oscar for chemistry, then McConaughey and Leto would definetly get it. Their dynamic reminded me largely of the one that Jon Voight and Dustin Hoffman had in “Midnight Cowboy.” In both cases, at least one of the characters are doomed, but when they are together, hope actually seems like a possibility.

While the performances are so great, it often feels like director Jean-Marc Vallee is trying to undermine his own film. Visual storytelling is a gift, but it can be a problem when a film doesn’t know when to stop. While this is a low budget film, buying something to keep a camera still for just a brief moment is completely feasible. Meanwhile, the buzzing sound motif and the constant quick cuts are intrusive in a film that would have benefited from just sitting still and letting the camera roll.

Yet, “Dallas Buyers Club” is still effective in what it sets out to do. This is a film about “going out with your boots on,” and by the end that is exactly what it does. It never loses its scrappy underdog vibe; on-the-nose metaphors and all.