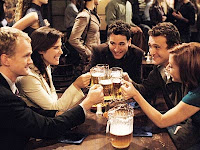 If I wanted, I could just give you a simple premise of “How I Met Your Mother.” I could tell you that it’s about a group of twenty-something New Yorkers who spend most of their free time talking about nothing while sorting out relationships in a bar. However, that premise would not give this show justice.
Here is the show’s true premise. It does center around a group of twenty-something New Yorkers. The most important of them is Ted (Josh Radnor), an ambitious architect looking for love. His friends include Marshall (Jason Segel), who is currently making his way through law school and is engaged to Lily (Alyson Hannigan), a teacher whom he has been with since college. In our eyes, Marshall and Lily seem like the greatest couple ever. Finally, there’s Barney (Neil Patrick Harris). Barney is the most confident member of the group. He seems more focused on getting women and getting drunk than actually making something of himself.
Here is where the show gets really original. The story is told from the perspective of Ted in the year 2030 as he explains to his kids how he met their mother. He begins his story the day he meets Robin (Cobie Smulders), the girl who would change his life. He explains how he falls in love with her, how she then becomes part of the gang, and then how they fall in and out of love all over again. Then hopefully one day, we’ll find out how he met their mother.
Before we talk about what makes this show so unconventional, lets talk about what makes it so funny. The show often uses typical comic devices such as self-contradictions. Other times, it uses the scenery to make us laugh. In one episode, the gang goes to a very noisy club. Rather than do the cliche thing and be able to hear everything they say while everything else is muted, the creators instead decide to add in subtitles.
Mainly though, the show manages to make us laugh by just having funny characters. Segel is a TV veteran and also a pro at bringing lovable awkwardness to a new level. Segel and Hannigan are perfectly cast in their roles and have a chemistry that most A-list stars can barely hold on film. Hannigan, meanwhile, will make you forget that the only thing you know her by was a certain incident at band camp involving a flute.
Despite whatever chemistry Segel and Hannigan may hold, the real show-stealer here is Harris. Maybe it’s because creators Carter Bays and Craig Thomas gave Barney the best zingers (can you say “legendary”?), or maybe it’s because Harris is so good at delivering his lines. Every time Harris opens his mouth, you’re bound to get a laugh out of it. With all luck, Harris will snag the Best Supporting Actor statue this year at the Emmys.
Now, lets get to the unconventionality of the show. “How I Met Your Mother” is not simply about a group of friends, but it has a larger purpose behind it. You feel like the creators knew exactly where they wanted the show to go with the show from the very beginning yet they don’t want you to know. In a way, each episode always seems to contain some mystery to it.
There will almost always be a shocking twist at the end, and each episode is formatted almost like a movie. For instance, one episode contains Ted trying to piece together all the clues from a very drunken night, a very likely inspiration for “The Hangover.” After some twists are revealed, you’ll feel dumb for not seeing it coming. Other times, the twist is so sneaky and so complex that even the smartest person would never see it coming (as much as I would like to give the example I really don’t want to ruin it for you).
“How I Met Your Mother,” like any traditional sitcom, has a laugh track. However, this isn’t the annoying kind of laugh track that “oohs” and “aahs” at every kiss and cheers loudly every time their favorite character enters a room. No, all it does, is laugh. And it doesn’t feel like the show is telling you when you’re supposed to laugh, but rather it laughs with you at all the right moments.
While the sitcoms of the 90s were simply about a group of friends (“Seinfeld,” “Friends”), the shows of the 2000s that want to use that format must strive for something further. “It’s Always Sunny in Philadelphia” had to add a father figure. “How I Met Your Mother” had to make itself a show about the past, the future, and massive time warps all while enjoying a few drunken nights and chats about nothing. And not only that, it’s a total breath of fresh air in television market clogged with uninspired ideas and reality shows.
Share on Tumblr