It’s been a hectic, overwhelming, and exciting week so far at Cannes. I wish I could get a post out everyday, but it’s not as easy as it seems. I have three films to talk about, all in one post, so I’ll keep this introduction brief. The last few days have included another walk down the red carpet, some delicious baguettes, and a lot of movie related business. Today, I present three films. You will definetly get to see one of these films in America. Another one could come our way. And one you probably shouldn’t see even if it does.

Read after the jump for the film breakdown:
Excision
“Excision” has received much buzz at Cannes for its bloody and controversial poster. However, it is also misleading. What appeared to be a “Carrie”-type thriller about a misfit teen with supernatural powers turned out to be a misguided shock-and-shlock fest that is only half ironic. It involves a series of gory and sexualized fantasies involving an abortion and another scene later on involving an organ transplant done by someone who isn’t a doctor.
This film has a few moments of genuine humor. The most priceless moment, perhaps, was the burst of laughter after the revelation that John Waters (director of “Pink Flamingos” and the original “Hairspray”) plays a priest. There is also an appearence from Malcolm McDowell, who played the most memorable creepy teenager in cinema. “Excision” has the potential to become a midnight movie classic. While I usually enjoy flawed and even hatable protagonists, “Excision” took it a step too far, and didn’t even make me want to know what Pauline (AnnaLyne McCord) would possibly do next. And oh yeah, there’s a bird dissection. Make of this one what you will. 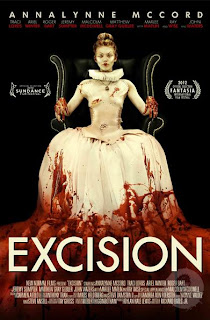 Reality
I still cannot tell if this Italian feature is an actual film or just a series of pretty images. In the end, I concluded that it was both.
Being at an international film festival, I decided that I had to see at least one foreign feature. This story of an average father who becomes a contestant on Big Brother, and loses his grip on reality because of it, has many features that seems distinctly American (including a mall). It displays perhaps some of the most breathtaking tracking shots I have ever seen, some which start from the sky and don’t stop until they’ve reached their destination. Many of the surreal scenes will invoke Italian Neorealist maestro Federico Fellini. But, just as with my biggest problem “8 1/2,” some of the most thrilling set pieces don’t totally connect. There is some very beautiful symbolic images, from the ever-watchful eye of the grasshopper on the wall, to the final image of the house which seems to resemble a television set.
I may have to see “Reality” again, as there were some biases in my experience. One problem with the Lumiere theater is taht the subtitles are displayed on a small, seperate screen below the movie, and it is hard to follow both. But seeing the cast and crew sitting in the center, treated like modern royalty, made the experience so interesting, and very worth it.

Lawless
I have set to see “Rust and Bone” (the most praised film of the Festival thus far), but “Lawless” is currently my favorite film at Cannes. I have so much to say about it that I can’t fit here. So a future review (and a second viewing) seem inevitable.
“Lawless” is the story of southern moonshiners during Prohibition. Tom Hardy stars as tough but loving gangster Forrest (Tom Hardy), who is said to be invincible, and Shia Labeouf plays his younger brother Jack who, as the southern colloquialism goes, breaks bad. In an unusual twist, the villain is a detective (Guy Pearce), and the good guys are the violent law breakers just trying to maintain the family business.
This is the second time Australian director John Hillcoat has breathed new life into a very American genre. The first time was with the Outback western “The Proposition.” “Lawless,” in a way, feels like a western. It is interesting for once to see a gangster story that takes place in a very rural setting. The streets of New York and Chicago are replaced with a small town in the backwoods of Virginia.
This Prohibition-set movie manages to be closer to “Miller’s Crossing” than “Public Enemies.” Labeouf has come a long way since “Even Stevens” and Hardy is quickly becoming one of the best actors around with his mumbly way of communicating which always seems to have a strange charm to it. My one complaint is that Gary Oldman does not have enough screentime.
It is good when a movie meets your expectations, but even better when it totally takes you by surprise. “Lawless” had a sense of humor about itself that I did not expect, and which ultimately makes the movie very unique. It hasn’t even been released in theaters yet, but I already know that “Lawless” is one of the year’s best films.

Next Up: The director’s cut of “Once Upon a Time in America.” Robert De Niro and Ennio Morricone showed up to last night’s screening. Here’s hoping they may just want to sit through their own four hour plus epic once more.
Share on Tumblr