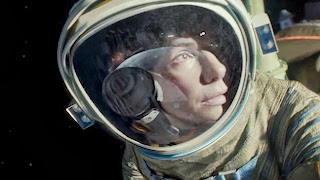 “In space, no one can hear you scream.”

This is now the famous tagline from “Alien,” and the basis for “Gravity.” “Gravity” hasn’t been advertised as a horror film, but it captures the fear of being alone in space better than most others that have tried way too hard to do so.

“Gravity” marks the long awaited return of Alfonso Cuaron who last directed “Children of Men,” which is still one of my favorite films of all time. Like “Children of Men,” there is no indication of when the camera starts and stops rolling. Cuaron is one for relentless action. Immersive might not even be a strong enough word to describe “Gravity.” I get the feeling that Cuaron just wanted us to float in space with him forever. There were multiple times where I felt short of breath. Apparently, you don’t need any dimensions beyond 3D to get all your senses this invested in a movie.

Plot details shouldn’t matter here much, and I want to keep it as surprising here for everyone who is reading this. The most important thing to know is that Sandra Bullock and George Clooney play two very attractive people in space. They’re assigned to fix a space ship. Things go haywire, communications breakdown, and suddenly they’re both free falling through space. If anybody remembers the scene in “Thank You For Smoking” where Rob Lowe breaks down of a movie set in space starring two attractive movie stars (one of them being Clooney), just know that “Gravity” is the exact opposite of that.

Unlike most film sets in space, “Gravity” is not about what life exists beyond our earth, but rather the lack thereof. When Matt Kowalski (Clooney) asks Ryan Stone (Bullock) what her favorite part about space is, without hesitation she replies “the silence.” Space is such a serene place, and that is why disaster makes it all the more frightening, because there’s nowhere to turn to when it hits the fan. It is also a fitting place for Ryan, who wants to be as far as she can from some of the tragic events of her own life.

Many have said that the script of “Gravity” is nothing special. While it is mostly very straightforward, it takes a lot more risks than people have been giving it credit for. One major event not even midway through completely alters the events of the film. In addition, its near lack of dialogue is a bold move which draws attention to how much of a visual driven media film is. The lack of dialogue prevents it from ever being bogged down by too many rules and too much exposition. Its never a terrible thing to make the viewers figure out some details on their own.

There are moments where it seems like “Gravity” is about to slip off into implausibility or worse yet, become “Vertical Limit” in space. However, it finds ways to stay out of that territory. “Gravity” is basically a two man show, with the two performers living up to the challenge. Bullock hands down steals the show, and proves that she can take nearly any kind of role. There’s a scene later in the film that involves her making a bunch of noises, including barking sounds, that’s she makes sad yet uplifting. I hate to make the “Alien” comparison again, but don’t be surprised if you see shades of Ripley in her performance.

When “Gravity” ended, I had that feeling I only get from truly great films. I felt a mix between exhilaration and profound shock that brought tears to my eyes. I could have sat there and watched it again. I don’t know how “Gravity” will hold up without the big screen and extra dimension, but I don’t want to worry about that just yet. While film itself is permanent, they are only in theaters for so long, and the experience is a fleeting one. “Gravity” is the reason why we go see movies in theaters.