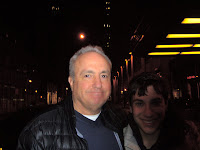 This weekend, I was lucky enough to attend “Saturday Night Live.” Yes, I waited for an entire night in brutal cold weather so I could see a two hour show. Was it worth it? Despite a few poor sketches, yes it was.

The host was Alec Baldwin. The musical guest was (blech) Jonas Brothers. It was a night to remember. It wasn’t just the show that was great, but the events that surrounded it.
SNL doesn’t give out tickets to most long before the show starts. The only way to get in is to wait on a standby line all night Friday night until they hand out passes at 7 am. You then come back that night and if you’re lucky enough, you get in. I was lucky enough.
But before we get to the show, lets back it up. This was the kind of event that was worth waiting in line on a freezing winter night all night long for. The bitter cold was warmed up by many surprise guest appearances outside. Keith Olbermann and Rachel Maddow walked by. Both stopped for a few minutes to talk. Maddow joked about her lack of makeup, while Olbermann wished us good luck. The usually angry Olbermann was surprisingly mild-mannered. Earlier in the night, the legendary Tom Brokaw stood about five feet away from me, and Brian Williams ran by as well.
But the real best appearances were from the people who were the reason I was there. Lorne Michaels, the genius who started SNL 34 years ago, came by. Twice. The first time, he was so impressed with our shouts and cheers to him, that he sent out some chefs to bring us out hot soup. It was his way of saying thank you for waiting all night. What a nice guy. He came by again later. Even though he was in a hurry, he still stopped for a few moments to sign autographs and take a picture. At some point, I also encountered newcomer Abby Elliot (probably best known for her hilarious Angelina Jolie impression) and Bill Hader. Hader spoke with us for a few minutes. He answered questions and took photos. He was somewhat awkward yet lively and kind. Those five minutes with him certainly were not enough.
Well, onto the show itself. I did not go to the live show, but rather the dress rehearsal. In fact this might’ve been even better. I was able to see a few good sketches that were cut from the live show. Also, Michaela Watkins performance as the obnoxious blogger was much funnier in the dress rehearsal. In the dress rehearsal, she was much more serious while in the live show, she was on the verge of hysterical laughter and breaking character.
The show itself was mixed, yet overall hilarious. The cold open left me feeling a little cold, but the rest of the show went uphill from there. I am still no fan of Jonas Brothers,  but their performances in their two sketches managed to be quite funny. Their Digital Short nearly stole the show. I still hate Jonas Brothers as musicians, but it is good to see that they can take and make a joke about themselves. It shows that they are not only funny, but human too.
Other highlights of the show included the Wii sketch, the TV land/Vincent Price parody, and a Sarah McLachlan/dog commercial skit that didn’t make it to the live show.
Maybe what was so great about going to SNL was seeing how it all works. Seeing how quickly they have to get everything together before the commercial break ends. Hating on SNL has become a popular practice nowadays. However, people don’t give the cast/crew of SNL enough credit. Doing what they do every week is probably the hardest job on Earth. Getting out of costume that quickly seems like a nearly impossible feat, but somehow they pull it off. Sometimes of course, it doesn’t turn out that well. But that’s what SNL is, it’s a hit-or-miss sketch comedy show. When a sketch is a hit, it’s classic. When a sketch is a miss, it’s painful. But just being in the audience, with Kristen Wiig and Alec Baldwin within shouting distance, it felt like every skit was a hit. And that whole two hour moment, was classic.
Share on Tumblr