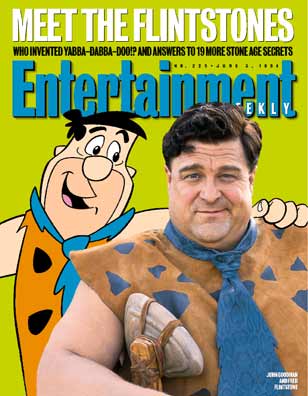 Because movies were bad in other times, too. Image via EW

Entertainment Weekly is not dead yet, but looks to be slowly marching itself to its own grave.

Yesterday, Entertainment Weekly announced that it would be laying off veteran film critic Owen Gleiberman, who has been around since the magazine’s inception. This comes a year after their other longtime film critic, Lisa Schwarzbaum left, and just weeks after the publication laid off other prominent staff members, and announced a complete remodeling of their website, which would now allow for community posting.

In short, this entails that the site will now be like BuzzFeed, in that anybody can post on it. These community posters will be paid in “prestige,” instead of, you know, money.

All of this news is dangerous for anybody who actually plans to make a living writing about film, television, music, and books. Time to pull out our sharpest hyperbolic knives!

This news impacts me as both a writer and a fan. When I first realized that I liked movies and wanted to figure out why I liked movies, Entertainment Weekly was one of the biggest factors in doing so. In fact, I did not know that there could be any entertainment journalism quite like that. The shelves at any given Barnes & Noble or magazine stand were covered in nothing but gossip rags. Then, among all of those magazines with headlines asking what the hell Britney was thinking, there was one with Clint Eastwood’s mug on the cover.

I knew this magazine had to be different and as soon as I possibly could, I became a subscriber. I collected their issues like other kids might have collected comic books. That collection still sits in a box in my attic, with some of the pages ripped out because, hey, some of those covers actually made great posters.

Unfortunately, my subscription did not last forever, and I began buying issues only when there seemed like a good reason to read it. Luckily, Entertainment Weekly had a solid website. I am no historian, but PopWatch was probably one of the first major pop culture blogs, or at least the first major one that I was aware of. EW was also doing insanely long in-depth TV recaps long before The AV Club and Vulture truly stepped up their game. Without their Lost recaps, I might not have known that time travel was a metaphor for a really convoluted plot device.

Looking back at how innovative they once were highlights the tragedy of the direction that the site is headed in. It is bad news for both writers and readers alike. Writers who actually want to get hired might not be able to get work while readers looking for good content might have to settle for hastily assembled listicles.

The EW purge is a mixture of cynicism and the negative consequences of democratizing the web. On the one hand, this could provide aspiring writers an opportunity they might not have had in a more stringent world. However, there are plenty of other opportunities for that. Anyone with an idea can start a blog now. For me, this blog is as much a passion as it is a way for me to hone my craft. It is a way for me to get my unfiltered thoughts out there without having to live up to anyone else’s expectations. I find this to be very cathartic.

But come on, EW, you are owned by Time Warner. You have money. You are the publication that people used to aspire to one day write for. Now, there will be little to no sense of honor once somebody hits the “publish” button. The community post standard is like looking at Internet freedom gone horribly wrong. By firing an established critic and opening up the floodgates, Entertainment Weekly is saying that anybody can be a critic. While anybody can have an opinion, not everybody can be a critic. This is an incredibly painful, very hypocritical statement for me to make, given that my status as critic and blogger can mostly be labeled as amateur, however, this is something I have been working for my whole life. It’s almost impossible for me to watch a movie for pleasure anymore; my brain just won’t turn off. Make fun of me all you want for taking notes in a theater, I am just trying to remember what I should write later. I have been fortunate to be paid for some gigs and I understand that a lot of positions will be unpaid for a while, but that doesn’t make the blow of this situation any more heartbreaking. *Gets off high horse*

While some of those community writers might not have Gleiberman’s experience, that doesn’t mean that they won’t try and write something that is actually meaningful. But as I have seen on sites such as BuzzFeed, a community post usually amounts to “90 Reasons You Grew Up in the 90s” or “10 Mean Girls GIFs that Describe Why Chocolate Pudding is the Best.” I just know that is what Entertainment Weekly will end up doing, because that is what the most people will share with their friends on Facebook. Entertainment Weekly used to be great because they went for the middle: it was a place where gossip met industry news and thoughtful criticism. Now, EW has abandoned the middle and focused on the lowest common denominator.

Luckily, the Internet is a giant place, and there are still places where you can find great writing. Just look at The Dissolve. Even Roger Ebert’s site is still as active and thoughtful as ever. However, now that the powers that be know how easy it is to just get writing for free, it might get even harder than ever before to get to that place where this weird habit turns into a profitable career.

So good riddance, Entertainment Weekly. It’s a crazy new world out there and your method of survival is, er, a little too desperate. *Tells high horse to get the hell out of here*