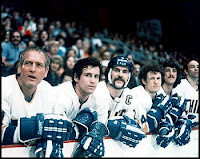 Last week, I announced plans of a remake to “Bonnie & Clyde” with Hilary Duff. Today, I am sad to announce that a remake is a go for the Paul Newman classic “Slap Shot.” “Slap Shot” was made in 1977, which is apparently too old for Hollywood. So far, the remake carries the writer of “Fun With Dick & Jane” and the director of “21″ and “Be Cool.”

“Slap Shot” is a movie that still remains funny and only remains outdated in the cars that the characters drive. It also happens to be a way better sports comedy (or sports movie, in general) than most that are made today. I doubt anyone could top the originality and brilliant slapstick that made the original “Slap Shot” such a classic.
Also, who could replace the Hanson Brothers (if you say the Jonas Brothers, I will no longer allow you to read this blog)? But most importantly, how can you replace Paul Newman? Newman’s death has shown us all that he was truly one of a kind and no person could ever replace him. But, really? Who do the people behind the “Slap Shot” remake think they can replace Paul Newman with?
Note: Apparently, there was a direct to DVD sequel to “Slap Shot” that starred Stephen Baldwin and Gary Busey. How about getting Busey and the other Baldwin brother (Alec) to star in the remake? It obviously won’t beat Newman and will still make me angry, but at least then audiences could have one big question answered: what happens when you give Gary Busey a hockey stick?
Some more information on the remake: http://popwatch.ew.com/popwatch/2009/02/slap-shot-remak.html#comments
Share on Tumblr