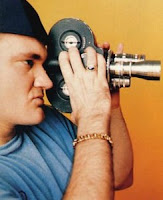 I spend a lot of time on this blog talking about Quentin Tarantino. And over the past few posts, I’ve mentioned “Inglourious Basterds” at least once. You’re probably so sick of the name by now. However, this is one piece of news you just may have to hear.

I don’t know how entirely truthful this piece of news is. It comes from Tarantino himself. The man does have a knack for bringing up film projects he never seems to follow up on. Over the years, he’s brought up the possibility of a Vega Brothers movies, a “Basterds” prequel, and a third installment of “Kill Bill.” Those sound all like great follow-ups to such great movies. Then again, we are talking about Quentin Tarantino, one of the most original directors working today.
That is why today I was thrilled to read a story today on FilmDrunk (originally from the New York Daily News) that Tarantino is throwing around the idea of doing a film based on the Underground Railroad during the days of American Slavery. He’s defining it as being sort of like a Western, but called a “Southern.”
I’ve been hoping that someday, Tarantino would do a pure Western. However, I’m also invested on how he’s taken the Western ideology and implanted it into Nazi-Occupied France, Japan, and the greater Los Angeles area.
I can already picture Tarantino’s vision of slavery now. Like “Basterds,” it will take place in a slightly altered alternate universe and likely center around a slave rebellion. One slave will escape his plantation and seek brutal revenge on their former owner. Meanwhile, another group of escaped slaves will seek their own form of revenge by destroying plantations, and scalping lots of white people. Samuel L. Jackson will play a badass slave seeking vengeance, and Christoph Waltz will play a harsh yet charming slaveowner. Daniel Day-Lewis will have a minor, but affecting role as Jefferson Davis (just because he needs to be in a Tarantino film already).
I have a bad feeling this project might go the way of that Vega Brothers film. Let’s hope not. As much as I really want to see Tarantino save the Western by making a true one, I am enjoying seeing the ideas of the Western get inserted into other aging dramas. Has there ever been a good, tasteful film chronicling American slavery besides “Gone With the Wind?” I remember once watching an 80s version of “Uncle Tom’s Cabin” in school. That’s about it.
Then again, if there was anyone who could make a movie about American slavery and do it right, it would be Quentin Tarantino.
More information on this here and here.
Side Note: If you must understand the true roots of my Tarantino obsession, read here.
Share on Tumblr