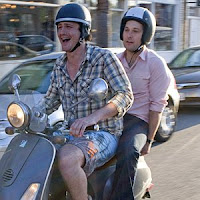 Finally, a romantic comedy that guys and girls alike can enjoy. “I Love You Man” is a movie that takes a tired plot and tries to do something new with it. For the most part, it succeeds.

“I Love You Man” begins with Peter Klaven (Paul Rudd), a timid real estate agent, proposing to his long time girlfriend Zooey (Rashida Jones) in an empty lot amid downtown Los Angeles. She says yes. From there, the movie is about pre-wedding anxiety. Peter realizes his whole life that he has connected with women so well, but has never had any guy friends. So, he goes on a quest to find a best man before his wedding.

After a series of failed “man-dates,” Peter stumbles upon Sydney Fife (Jason Segel). Sydney is the kind of guy everyone wishes was their friend: he’s funny, philosophical, and does his own thing. Plus, he has a dog named after an Egyptian president. In no time, the two become nothing short of best friends.

“I Love You Man” is equipped with an ensemble that includes some of the best names in comedy. There are a few old legends (Jane Curtin, J.K. Simmons), a few new legends (Jon Favreau, Andy Samberg), and a few rising stars (Thomas Lennon, Sarah Burns). However, the real stars of the movie remain Rudd and Segel.

For years, Rudd was known as a great sidekick in movies like “Anchorman” and “The 40-Year-Old Virgin.” Last November, his performance in “Role Models” proved that the hilarious pessimistic cynicism he brings to supporting roles could work well in lead performances as well. In “I Love You Man,” he is given the chance to once again lead, and he shines. This time, he manages to bring more awkwardness than cynicism into the character of Peter. Rather than being someone who can’t communicate with women as in most romantic comedies, he is someone who can’t communicate with men. Rudd uses this for full, cringe worthy effect.

Also further improving his comedic ability is Segel.  His performance here is less sad sack than his performance in last year’s “Forgetting Sarah Marshall” and more like his performance in “Freaks and Geeks,” as he is someone who seems to enjoy his ridiculously unrealistic life while being totally oblivious to reality.

Although “I Love You Man”’s plot is at times by-the-numbers, it doesn’t feel that way because of the twist added to it. The writers also deserve credit for incorporating the Lou Ferrigno cameo into the plot rather than just having it there for the sake of having a celebrity cameo. Also, it is great that writers John Hamburg and Larry Levin turned the final wedding scene into a somewhat serious moment rather than a cheap parody of “The Graduate.”

Unfortunately, this movie isn’t flawless. Favreu steals almost every scene he is in, but his marriage plotline could’ve been tied together better with the main storyline to provide insight into the struggling relationship between Pete and Zooey. Also, Samberg and Simmons are criminally underused.