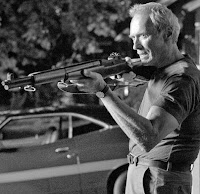 Sure, he deserved to be nominated for his creepy turn as Harvey Milk’s assassin, Dan White, but his best performance of the year was as former commander-in-chief George W. Bush. Brolin’s performance was more than just an imitation; it was a re-creation. Brolin brought out all of the small mannerisms of Bush from his Texas accent to the way he moves his hands. Most importantly, he brought a surprising layer of sympathy; portraying him as something deeper than just a man famous for uttering “is our children learning?”

“The Wrestler” By Bruce Springstein

Some say that music can make a movie. In “The Wrestler,” this song, that played over the closing credits, encapsulated the entire movie in about three minutes. It’s a beautiful song about redemption that should have been a shoo-in in the Best Song category. For now, Springsteen will just have to live with his Golden Globe, victorious Super Bowl halftime show, and the Oscar he won in 1993.

Despite approaching his mid 70s, Woody Allen still manages to make at least two movies a year. “Vicky Christina”’s story about two different kinds of love paid close attention to character and balanced a sense of humor without overdoing the drama. For achieving this, the “Annie Hall” scribe should’ve earned his 15th Best Screenplay nomination.

Now, this is just perplexing. At the age of 78, Eastwood makes one of the best films of his career, and the Academy totally overlooks it. “Torino” is similar in theme to “Unforgiven” and “Million Dollar Baby” as it tells the story of a man coming to terms with old age and the idea of death looming around the corner. Eastwood deserved a nomination for his grunt filled performance as well as his dark directing, and the screenplay deserved a nod as well for managing to turn a dark concept into something surprisingly funny.

The Songs of “Forgetting Sarah Marshall”

A few months ago, I wrote a For Your Consideration column for the songs of “Sarah Marshall”: “Inside of You,” “Do Something,” and “Dracula’s Lament.” Of course, the Academy didn’t listen. These three hilarious songs are easily the most singable of any original song in a movie this year, and “Inside of You” even manages to outwit “J**z In My Pants” in ridiculous sexual innuendos. The Academy has never been too nice towards comedies. However, this year they were nice enough to recognize “Tropic Thunder.” Why couldn’t they go a little further and nominate another great example of comedy. I mean, there are still two empty spots in the Best Song category. Why keep them vacant?