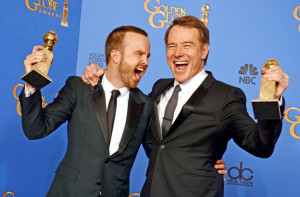 I miss these guys.

Last night’s Golden Globes ceremony was filled with surprises. Frankly, a night of surprises is much better than a night where everything goes according to plan.

While a lot of talented people and deserving films and TV shows went home empty handed, it was a pure joy to see Matthew McConaughey take on his Wooderson persona while finally being awarded for his recent career renaissance. In just a few seconds, all of those years he spent in rom-com limbo were virtually forgotten.

While Tina Fey and Amy Poehler might not have been as good as they were last year (though that Clooney line from the opening monologue killed it), they are still Tina Fey and Amy Poehler so their presence alone makes me happy enough. The Globes are not as exciting as the Oscars, but it sure is fun to see Emma Thompson stand on stage barefoot while many winners actually looked genuinely surprised when their names were called.

Read below for a detailed breakdown of some of the highlights of the night. Here is what I liked, what I didn’t like, and what I still don’t have definite feelings about:

Leonardo DiCaprio- I was really rooting for Oscar Isaac in this category, even if he really didn’t stand a chance. However, Leo’s performance was a seriously incredible feat in so many ways. He pulled off feats of physical comedy that few skilled comedians could ever pull off as well as he did. While the Globes have no direct impact on the Oscars, they are one of the early important awards shows and often set the mood for the rest of the season. I would not be surprised if this “Leo Needs to Win an Oscar” campaign grows bigger and louder in the weeks to come.

Spike Jonze- Jonze won for “Her.” His win was a very welcome surprise. “Her” was everything a great screenplay should be: equal parts funny and sad, with a strong hint of honesty thrown into the mix. “Her” felt like it Jonze’s most personal effort yet, while it also thought up one of the most plausible portrayals of the future on film. Oh, and it is a beautiful look at love in the 21st century. Sometimes, you just have to look into the future in order to understand the present.

Diddy- He really is his character from “Get Him to the Greek.” Please get this guy in more comedies.

U2 Wins An Award- It’s about time Bono won something! I haven’t seen “Mandela” yet or heard “Ordinary Love” (note: I can already tell from the title of it alone that I will probably hate this song), so maybe my hatred for Bono is clouding my judgement. Or maybe I am just upset that “Please Mr. Kennedy” didn’t win. That was the last chance that song had, given that it is not eligible for an Oscar. Few people could ever write a song that is as cheesy as it is catchy. My feelings about the winner of this category can best be summed up by this Tweet: 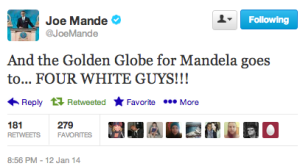 American Hustle: I am not trying to put “American Hustle” down here. In a strong category, it may have been the weakest film. After a second viewing, some of the film’s weak points began to show. Mainly, it loses momentum, which makes the film feel even longer than “The Wolf of Wall Street,” despite being an hour shorter. Also, it is not fair to consider it as a comedy. It is a fun, entertaining drama. I wrote more about it in an article for PolicyMic. #shameless #self #promotion #isweariwillneverputahashtaginapostagain

Jennifer Lawrence: No offense to Mrs. Lawrence. She was great, if a little miscast, in “American Hustle.” However, the Best Supporting Actress award belonged to June Squibb for her performance as a loud, proud matriarch in “Nebraska.” The cemetary scene has been the one that most people have been talking about, and for good reason. However, her greatest moment is when she defends her husband Woody (Bruce Dern) against his entire family. It’s a moment that actually made me want to stand up and cheer.

Tatiana Maslany- No offense for Mrs. Wright, but Tataina Maslany’s performance in “Orphan Black” is unlike any on television right now. Maslany plays multiple characters, all with different personalities, who often have to talk to each other, and it is always believable. It is one of the most demanding performances I have ever seen, and Maslany always pulls it off. Luckily, “Orphan Black” is still young, and there is still time to give Tatiana Maslany every award ever.

How Do I Feel About This?

Brooklyn Nine-Nine- Much of the hatred towards “Brooklyn Nine-Nine” seems to be unfounded. It is a solid comedy that quickly recovered from a weak first few episodes, and its win for Best Comedy was a welcome surprise. In a short amount of time, the show has already created a strong sense of familiarity amongst its characters, and it includes a few standout performances, especially from Terry Crews, Stephanie Beatriz, and Andre Braugher. However, the show hasn’t even been on for a full season. “Brooklyn Nine-Nine” still needs time to progress and mature even further. It has yet to stand on the sturdy foundation that “Parks and Recreation” has spent six seasons building. It is not that “Brooklyn Nine-Nine” doesn’t deserve to win, it is just that this honor seemed a little premature. But hey, anything is better than another victory for “The Big Bang Theory.”

Woody Allen- That montage of all of his films really made me want to drop everything and have a Woody Allen marathon. However, the fact that he didn’t show up made the Cecil B. DeMille honor that he received just a little less special. Maybe it was believable in the 1970s that he wouldn’t come to Los Angeles, but Allen has now shot films in London, Paris, Rome, and San Francisco, so we know that he’s not afraid to leave New York anymore. It probably wouldn’t have been too much effort on Woody’s part if he had at least submitted a pre-taped thank you. Instead, we got a bizarre speech from Diane Keaton, wearing her “Annie Hall” outfit sans hat. Her speech was like that scene from every movie where a character tries really hard to distract the bad guy while somebody tries to stop the bomb from going off.