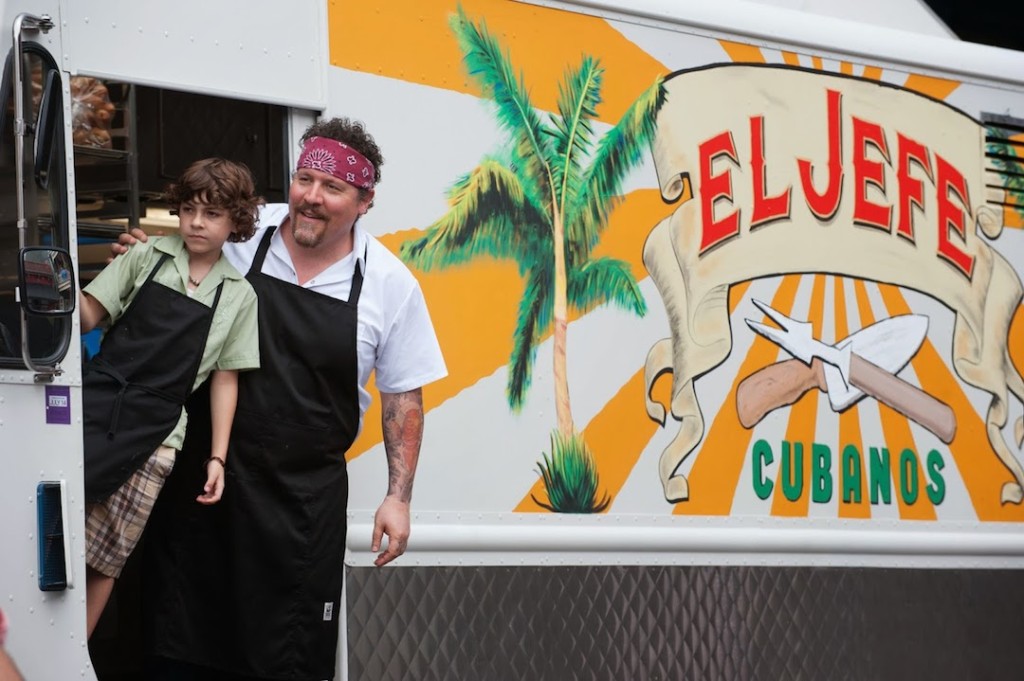 It actually took me until the very end of the movie to realize that El Jefe means Chef and I don’t know how I feel about myself now. Image via LA Weekly

The uplifting Chef marks the return of Jon Favreau. Well, he never really went anywhere, but when you direct something like Cowboys & Aliens, you seem like the shell of a director for at least a little while. While Chef isn’t a consistently good meal, it is easily digestible. Sorry, I needed just one food metaphor in here. For the non-foodie out there: Chef is not perfect, but it is enjoyable to watch from start to finish.

In Chef, Jon Favreau plays, you guessed it, a chef. More specifically, he is Carl Casper, who is somewhat of a celebrity chef known for his unique food sensibility. Chef Carl also doesn’t like to play by the rules, which isn’t helpful for his current job in a restaurant run by an owner (Dustin Hoffman) who knows more about tradition than variation. Carl struggles professionally, especially after Ramsey Michael (Oliver Platt), the most powerful food critic in town, gives him a terrible review.

Meanwhile, Carl struggles in his personal life, too. He is dealing with a divorce and a son who grows more and more distant by the day. It seems Spielberg definitely taught Favreau a lot during their time together, as family issues have always been a dominant part of Spielberg’s films. Yet, a lot of this movie seems like Favreau trying to erase everything he did in Cowboys & Aliens. In the movie, Carl keeps talking about wanting to go back to basics. Chef is about the farthest thing from any of the big budget blockbusters Favreau has been doing over the past few years but hey, without the Iron Man connection, we would have missed out on a great Robert Downey Jr. cameo here.

I have trouble nailing down Favreau’s directing style, but what I will say about him is that he is both passionate and curious about any topic that he turns into a movie. Those are some of the best qualities anybody could ask for in a director. Seriously, if you can make a grilled cheese sandwich look interesting (no offense to grilled cheese sandwiches), then you clearly deserve to sit in the director’s chair. Chef is a celebration of fine cuts of pork and good parenting.

Movies and TV shows have been trying to incorporate social media for a while now, yet the combination still doesn’t feel organic. Chef is about a food truck that becomes successful (spoiler alert?) thanks to Twitter. Chef represents Tweets in these little boxes that pop up over people’s heads, like modern day thought bubbles. Whenever a Tweet gets sent out, it turns into a little blue bird that flies away. Sure, it’s a little cute, but it sometimes takes you out of the world. This will also work against Chef in the future. I don’t know what new technology will be available in the future, but what I do know is that Chef will eventually feel outdated. Looking at the Tweets pop up onscreen will be one day be the equivalent of seeing Michael Douglas talking on a giant cellphone in Wall Street.

Those problems are years down the road, though. In the present day, Chef wraps up just a little too nicely. Everybody is a little too happy, and everything works out just a little too well. I am not saying that I was looking for a dark existential story in Chef, but I did hope it would acknowledge that not everything in life works out perfectly, as most good movies should. Having said that, I liked this movie. I enjoyed myself, and I never for a second regretted seeing it. The moments of joy don’t always work against it. And all of that pork. What I am trying to say is that I recommend you see Chef, especially if you don’t mind mixing meat and dairy.