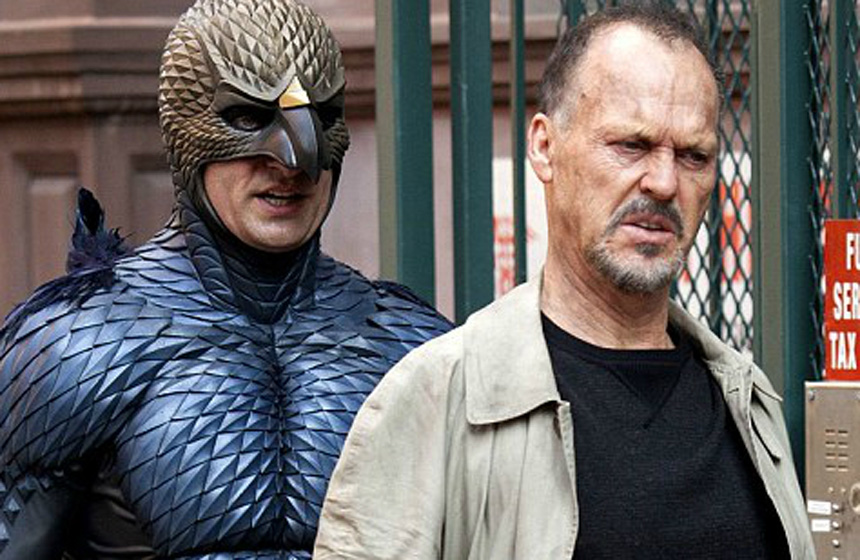 It’s a bird! It’s a plane! Oh wait…it actually is a bird. Image via Indiewire

“This place smells like balls…how did we get here?”

If you were going into Birdman expecting to find the beginning of the next big franchise, then you might want to look elsewhere.

Birdman might be the strangest film of 2014. It is also one of the most ambitious; one that is chock full of ideas. A lot of it hits, and when it misses, it really couldn’t give a shit if you liked it or not. Birdman is the other big gimmick film of 2014 (the other being Boyhood). It needs the gimmick to survive, and there’s nothing wrong with that. The gimmick in question, a never ending tracking shot, helps the film transcend its concept, which is actually pretty great to begin with.

In Birdman, Michael Keaton plays a washed up actor named Riggan Thomson who was once famous for playing a beloved superhero. Sound familiar? Riggan now plans a big comeback by taking on an unconventional role. Still sound familiar? If it doesn’t at this point, then time to search “Michael Keaton” on IMDB. Anyway, Riggan’s dream role is to star in a Raymond Carver play. This could be a reality if the insane people he works with could step back a little. Come to think of, Riggan might be able to sabotage his own comeback before anybody else even gets the chance.

As the artist formerly known as Birdman, Keaton is as much of a revelation as you could imagine. He plays so many different roles in this film, and sometimes all at once. We are expected to sympathize with a man who is vain and possibly insane. And it completely works. Great actors like Keaton just have a charisma that is hard to look away from. His work here could even top the McConaissance and the Affleck Reemergence because of how intensely personal it seems to be. I can imagine that every actor who once starred in a blockbuster hears money screaming into their ears every time they try to do something different.

Keaton’s performance, which may be very close to his own life, is just one piece of this film’s hyper reality puzzle. Birdman feels like Black Swan, in that it is also about the dangers of going too far down the authenticity rabbit hole. Sure, it is good to make your art feel real. But even when we look for art that is realistic, we still hope for some element of escape. We want art to feel real so that we can relate to it, not necessarily so that we can live inside of it.

I admit, that last paragraph sounded ridiculously abstract. Birdman, which, I should note, is actually called Birdman or (The Unexpected Virtue of Ignorance), forces you to think that way. This is the kind of film that uses a cocktail napkin to show that mankind is insignificant in the grand scheme of things. This is also the kind of film where Michael Keaton runs through Times Square in his underwear and Edward Norton gets a boner onstage as a result of his ridiculous commitment to performance. At its essence, Birdman is about the war between art and commerce, and the film brilliantly employs the best of high and low culture. At one point, Emma Stone emotionally tells her father that nobody cares about him. At another, Edward Norton asks Naomi Watts to play with his balls. His words, not mine.

The greatest joy of Birdman is seeing director Alejandro Gonzalez Inarritu embrace absurdity after years of gut-wrenching dramatic work such as Babel and Amores Perros. Birdman is the best Hollywood farce since Bowfinger. Inarritu’s sprawling ensemble pieces all seem to be leading up to Birdman. The chaotic continuous take that encompasses the film perfectly puts us into the shoes of somebody living the show biz life. It is a lot less of people tap dancing and singing “there’s no business like show business!” than I imagined.

Again, Birdman may be the strangest film of 2014. That is probably the highest compliment that I could pay it. It subverts the comeback/underdog story in a way that truly needed to be done. I could a bunch of more cliches and tell you that Birdman is “explosive,” or I could just end this by saying that it’s one of the best films of the year.