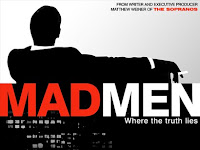 In case you haven’t caught up with the incessant (but well deserved) media coverage in the past few weeks, television’s best drama, “Mad Men,” will be making it’s triumphant return tomorrow. The season three premiere will be airing Sunday, August 16 at 10 PM on AMC.

“Mad Men” is the best drama currently on TV (sorry, “Lost”). It does so by being multi-layered, well-written, well-acted, well-directed, and visually stunning.
For those procrastinators out there who want to catch up on the first two seasons, you still have 23 hours to do so. For those of you who want to watch but don’t feel like watching that much television (note: I wouldn’t recommend against this; It would be time well spent), the recap attached below is very helpful:
Share on Tumblr