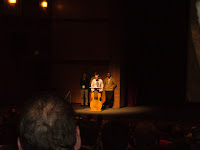 I will admit, for a film addict in the heaven that is Sundance, I was not too happy this morning. First off, I was two hours too late for tickets. That meant “Spring Breakdown,” “The Informers,” and “Brief Interviews With Hideous Men” amongst others were totally sold out. Then, I found out that Michael Cera and Charlyne Yi had left just one day earlier along with John Krasinski and Amy Poehler. Blurgh.

Then, I decided to stop moping around. Something cleared my mind. Maybe it was the mountain air. But whatever it was I suddenly began to realize that I was now amongst the Hollywood elite. Not just the actors, but the producers, directors, and even production managers. I met a girl named Karla from UCLA who has a stop-motion animation short playing in the festival which I should be seeing tomorrow. She is just one of the many who see the festival as a beacon of hope, where dreams of a future in Hollywood may come true (or “where wings take dream,” as George Bush would say. Man, I’m going to miss Bushisms). With her influences of Terry Gilliam and “Sesame Street,” she’s ready for anything.
Later at lunch, I sat with a group of strangers with a lot to say. One of them was Elizabeth Hughes, a Unit Production Manager (UPM) and had a documentary at the Festival entitled “We Live in Public.” Her job is to manage the budget and decide how to spend investors’ money.
Hughes had much advice for anyone aspiring to enter the film industry. It is no easy journey to the top. She offers three tips: internships, meet and talk to everyone, and prepare to be professional 100% of the time. Always follow up with everyone (that includes business cards) but don’t forget, you will always be working.
“The film industry doesn’t have hours,” said Hughes.
Things got even better when I attended “Paper Heart.” Sitting just a few rows behind me was Mike White. You may know White from “School of Rock” but he also wrote several episodes of “Freaks and Geeks.” I met him, took a picture with him, and told him how much I appreciated his work. I was so shocked/nervous I forgot to tell him the everlasting praise I had for him for being a part of “Freaks and Geeks.”
But, the real reason I was there was to see “Paper Heart.” The movie is directed by Nicholas Jasenovec and stars Charlyne Yi (who also co-wrote the screenplay), Jake Johnson, and Michael Cera. There is also a huge amount of cameos, but I won’t give them away. The film starts out slow, but once Cera joins in, the film picks up speed. I will try to not give so much away but what makes “Paper Heart” so unique is the way it is shot. It mostly abandons typical narrative style and becomes kind of a documentary within a mockumentary. It follows Yi (playing herself) as a version of herself who is awkward and unsure of what true love is. She goes all “Borat” and travels cross country to find out what random people believe love is. And then she meets Michael. I’ll give away not much else.
“Paper Heart” embraces the beauty of awkward humor. Cera is awkward as usual and Yi is just as awkward. Her body movements and long pauses may be painful but they’re also loveable. She is the female Cera and a new face to look out for in comedy. I predict by the end of this year she’ll become a huge star (one of the entertainers of the year? Maybe?).
I spoke with “Paper Heart” director Jasenovec after the movie ended. He explained to me that the movie really had no script and was basically just a five page outline. He believes it makes the story feel more natural and realistic. He couldn’t be more right. The final moments of the film remind me something of the final moments of “Lost in Translation.” He believed this style worked best because it helps the audience see the events through her eyes and that “the only way to understand love is to experience it.”
Later, I went to a restaurant called Bandits and had some buffalo wings with a side of steak covered nachos while staring at paintings of cowboys. My first truly western experience topped my first true experience in the film world. Tomorrow will be another adventure.
Tomorrow, I will be waking up very early in hopes of getting more movie tickets. I could be finding out what homework I should catch up on now. Or going to sleep. But then I remember, “the film industry doesn’t have hours.”
P.S. I unfortunately missed the season 5 premiere of “Lost” tonight. Hopefully, I will be able to watch it within the next few days and write about it. That means until then, keep your mouth shut about any twists, turns, and shifts in time.
P.P.S. Today was the first full official day of Obama’s presidency. As much as I like Obama and won’t miss Bush, I will definitely miss Bush’s very positive effect on humor in America. Here is one fine example and one last chance to show this clip while it’s still slightly relevant:
Share on Tumblr