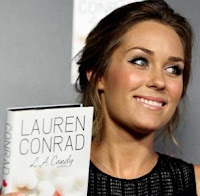 If you know me, you know I often like to use this blog as a forum to gripe about the dumbing down of popular American culture. Every now and then, I see a sign that maybe I’m wrong (“Inglourious Basterds”). But most of the time, my complaint goes unchallenged. Don’t believe me? Then just look at this little bit of news from today.

“L.A. Candy,” a novel released earlier this year by “The Hills” star Lauren Conrad, will be made into a movie. The rights for the book were bought by Temple Hill Entertainment, the studio also responsible for bringing “Twilight” to the big screen.
While it might be hypocritical for me to constantly bash “Twilight,” given that I haven’t seen a second of it, there’s absolutely no hypocrisy in me slamming this horrendous idea.
One day at work this summer, I spotted a copy of “L.A. Candy” sitting on the table. For fun my fellow workers and I decided to read it. After reading a few pages out loud, my boss remarked, “my entire college degree just evaporated.” I don’t have a college degree yet, but my mind certainly melted quite a bit. The content of “L.A. Candy” doesn’t in the least bit sound like it was written by an actual writer. Every page sounded like a bunch of text messages between two 13-year-old girls about a Jonas Brothers concert. Yes, the words “OMG” and “LOL” are used frequently.
Why is it that we continue to throw so much money at stars of a show like “The Hills?” And on that note, why must we reward trash with what will likely be an even trashier film adaptation? Whatever, I’m just going to sit here and wait for the releases of the adaptations of “Fantastic Mr. Fox,” “Where the Wild Things Are,” “The Road,” and “Rum Diary,” and pretend this never happened.
Note: What director would be the perfect match to adapt “L.A. Candy?” My choice: Brett Ratner. Or maybe David Lynch. A few severed ears and deformed fetuses might just be enough to scare Conrad away from Hollywood forever.
Share on Tumblr