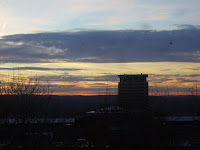 If you’re someone who occasionally snoops around this blog, you might have noticed something recently: new posts aren’t coming. No, I haven’t died. No, I haven’t suddenly lost my interest in movies. And no, The Reel Deal is not reaching its end anytime soon. It may just be reaching a new stage in its short yet sweet life.

Let me just warn you that this following post has nothing to do with any particular movie. I also don’t want to justify my “laziness.” I would just like to explain, and make it loud and clear that The Reel Deal isn’t going anywhere.
What has happened to me? Well, I went to college. For those of you who don’t know, college works a bit differently from high school. Time functions differently. Sleep happens sporadically, and even rarely. Worst of all, time really does fly. One day is never enough time to accomplish something. Even with so much free time, there is always something happening, something else to be doing.
In this time, I unfortunately lost sight of my defining source. Those days when enlightenment seemed to come from the cinema and discovery came from writing about it somehow got muddled. I began to forget that feeling, that so-called ecstasy of cinema.
I didn’t try to lose this on purpose. The last time I remember feeling this was the last time I walked into a theater to see “The Social Network.” That was a movie that was just about so perfect in every way that it made me wish every movie I saw could be just as good.
So maybe in that respect I can blame Hollywood. They’ve released few movies so far this season that seem worth taking that forty minute bus ride to the mall. Oh yeah, finding a movie theater in upstate New York can become even more of an adventure than an actual movie itself.
Just because I haven’t been to the movies in so long, doesn’t mean I’m out of touch. I’ll go see “127 Hours.” I’ll go see “True Grit.” Hell, I might even see the new “Harry Potter.” I so dearly long to feel the ecstasy of cinema in theaters again. I can’t wait to walk out of a movie again and feel the same way I did after seeing the likes of “There Will Be Blood,” “Inglourious Basterds,” and “Inception.”
But while there is nothing like a good movie, I’ve found those pleasures of the best cinema can even be found in real life. What is that feeling? It’s the feeling of finding something amazingly unusual in such a normal situation, such as a beautiful spring day in the middle of the gloom of November.
At this point, you probably wished I would stop writing this piece. What is the point of this if I’m not analyzing a movie or complaining about how much I hate Michael Bay? Because I want to reassure you that The Reel Deal is not dead and never will be. It’s simply heading in a new, uncharted direction. I don’t know what direction this blog is headed in, just as I don’t know what direction my film major will take me. Then again, life is more fun that way.
Share on Tumblr