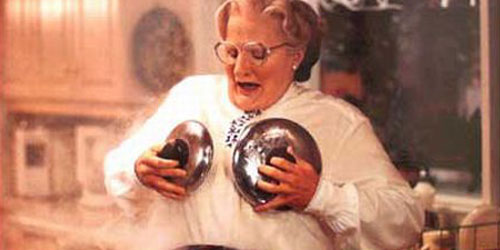 Robin Williams’ death is still hitting me hard. I imagine it is still hurting everybody else as well. Over the past few days, it has sparked a much needed national conversation about depression and suicide. It has also reminded everybody of precisely what made this man such a genius, and why his loss is truly so devastating. He was talented in his work, and kind to everybody that he met.

In order to celebrate the life of Robin Williams just a little bit more, here are five essential film performances from him:

The Birdcage is what I would call a PFC (Phillips Family Classic). I wouldn’t quite call Robin Williams the straight man in this (no pun intended), but he is the more subdued in compared to the hilariously flamboyant performances by Hank Azaria and Nathan Lane. People typically seem to shut up around Robin Williams, partly because he is so good that he takes up all of the possible humor space. Yet, he was such a generous performer. Like every great improviser, he would “yes and” and then give you all of the time you needed to be funny.

The director/actor pairing of Terry Gilliam and Robin Williams feels as natural as Scorsese and De Niro. This movie might be about Jeff Bridges (don’t get me wrong, Bridges kills it in a pre-Dude role), but the movie belonged to Williams. Sure, his character was a smelly, crazy homeless man, but he never let you believe. Williams loved his craft too much to ever let you just believe that. This is one of Williams’ funniest performances, and it’s one where he literally bares all (hairiness and all). There is one scene where everyone goes to get dinner at a Chinese restaurant and Williams sings “Lydia the Tattooed Lady.” If any moment were to define Williams’ entire career, it could have been just that.

Mrs. Doubtfire is a modern classic. Sure, Sally Field is great, and so are scenes where ponies eat cake while “Jump Around” plays in the background. However, I strongly believe that Mrs. Doubtfire would have been a shell of itself without Williams’ presence. This might have been the toughest comic performance that he pulled off in any feature film that he starred in. Maybe the craziest part about Robin Williams is that he often seemed like he was giving one hundred different performances all in one moment and yet, he always mixed mania with humanity.

I have only seen Popeye once, and it was a long time ago. I had no idea that as a kid, I was tricked into watching a Robert Altman film. Besides the musical numbers, I think what I remember best is that cheesy giant octopus. From the voice to the muscles, Williams always committed and went all out. Today, Popeye is deservedly viewed as a cult classic.

World’s Greatest Dad is one of the finer films of the latter part of Williams’ career. It is the darkest comedy imaginable, so this is a performance devoid of his usual physical comedy. This is a subdued Williams. He rarely smiles or even frowns; instead, he just gives the look like his life is making no forward or backward progress. For somebody who usually goes all out, Williams sure could be good at remaining stagnant.