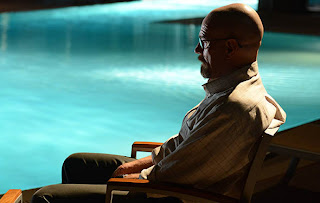 This is a recap of episode 12 of season 5 of “Breaking Bad.” The episode is “Rabid Dog.”

Tonight’s “Breaking Bad” episode requires a little history lesson on the “Breaking Bad” universe. So for just a brief moment, let’s go back to season two. Remember that pink teddy bear that fell from an airplane that signified that Walt’s selfishness could lead to an airplane crash? Well once again, Walt can’t do anything without ruining the lives of others. In “Rabid Dog,” Walt showed that if he was going down, his whole family would be going with him.


“Rabid Dog” is one of the more plot-driven episodes of “Breaking Bad.” It is also one of the quietest. Music and crazy dutch angles drive a majority of the action. Along with the creepy shadows, parts of this episode felt like scenes from “No Country for Old Men.” Episodes of TV are so short that sometimes its hard to have one quiet moment. “Breaking Bad” can make an entire episode chock full of them.

Slowly, the false exterior that Walt tries to project on others is slowly crumbling. Even Junior starts to see through Walt’s lies. I also could see Walt’s lies much better this week. That’s not because we’ve all gotten to know Walt so well, it’s more because his lies are getting worse. Come on, faulty gas pump? If you could convince people that you didn’t murder someone, how come you couldn’t cover for some gasoline stains? Once Jesse called Walter out, the show itself (let’s pretend it’s a living, breathing thing) also became self-aware of Walt’s lies.

So, what does Walt do to keep his lies going? He gets the family a hotel room for the night. Junior, of course, is excited about this (Junior you’re great, but you’re also kind of the Chris Brody of this show). Though RJ Mitte did have one of his best episodes ever. Junior is one of the few people left who still thinks highly of Mr. White. Tonight, Junior acts like he knows something is up, but it is not the full truth that he will inevitably learn. In one of the most memorable moments of this episode, Walt sits in front of a pool (his thinking spot in several other episodes) contemplating, and Junior gives him a big hug. Sometimes, it’s easy to forget that this monster still has to be a father.

Junior isn’t the only one that Walt has to father. No matter what happens, Jesse will be another son to Walt, which is why Walt still seems to be looking out for his best interests. This is something that Hank decides to exploit. Tonight, “Breaking Bad” broke from its usual narrative format to go back in time to the moment right before Walt got into his house, when Jesse was about to burn it down. Turns out Hank decided to stop by and calm Jesse down. Hank offers Jesse revenge through the legal system.

Hank and Jesse are a great little odd couple, given their history together, which could be described as awkward. I think I see a possible father-son bond between them, which began with that nice little moment when Hank buckled Jesse’s seatbelt for him. Hank is more of a caring man than Walt is at this point, yet Hank would also sacrifice Jesse’s life for his cause as well. Poor Jesse is always getting caught in the middle of everyone’s selfishness. If Jesse is a dog like everyone has been labeling him, he is just an innocent pooch that wants nothing more than someone to love him.

The face-off between Hank and Walt heated up once again. The two of them are exact opposites yet, they have a lot in common. Both of them would surely put somebody else’s life on the line to advance their goals. This is why I think that this could all possibly end in a stalemate. Hank knows every way to track down Walt, but Walt is always one step ahead, and he is relentless in getting exactly what he wants.

There has been a lot of bloody episodes of “Breaking Bad.” Nobody died in this episode, but the scent of death was all around. Marie, in one of her most chilling scenes, tells her therapist that she’s been doing some research on different poisons. Imagine if she’s the one who eventually brings Heisenberg down. And of course, nearly everyone at one point in this episode suggested that Jesse needs to die. Even Skyler, who’s trying so hard to be the better person, thought it’d be for the better to bring down Pinkman. Saul compared Jesse to Old Yeller. Then by the end, Walter makes the phone call in which he says “Todd, I think I might have another job for your uncle.” Unfortunately, we all know exactly what that means.

Overall, this was a very different episode of “Breaking Bad.” Especially when Jesse wears a wire, it felt almost like an episode of “24.” Fortunately though, this didn’t turn out like an episode of “24,” as in the writers didn’t rely on some cheap plot shortcut, and nobody decided to shoot the person they needed for information because they were unstable (yes, this happened A LOT on “24″). “Breaking Bad” doesn’t roll like that.

Until next week everyone, Keep Calm and Tread Lightly.