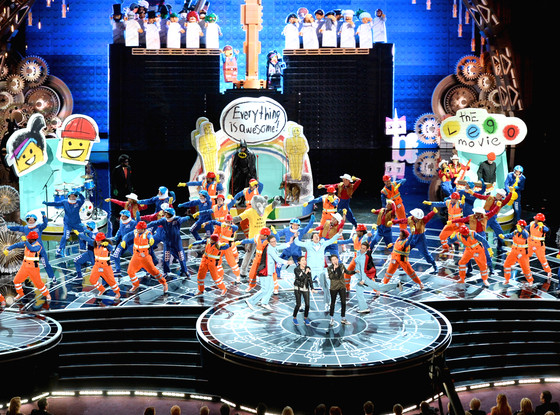 “Take the Oscar decorations down from the tree,” Joe said to his son Timmy, “also, why are you decorating our lawn for an awards show?”

And now that the Oscars are over, we must face the reality of February and the six more weeks of winter that moron groundhog gave us. Look, I know that in the grand scheme of things, the Oscars are pointless. But you know what else is? The Super Bowl. Yet, nobody is ever criticized for caring too much about the score of the game. The Oscars give us something to laugh at, something to yell at, but most importantly, it gives us something to bond with other people over.

Last night’s ceremony was one of the worst in recent memory. It was bloated and overlong. Yet, I can’t argue with some of the winners, and that “some” is more than most years. However, I would love to teach voters what “screenplay” and “writing” mean. Anyway, a lot of people are angry that Boyhood didn’t win Best Picture, and rightfully so. However, just keep in mind that winning an Oscar is sometimes the worst thing for a film’s legacy. But hey, in terms of films it could have lost to, Birdman isn’t half bad.

Every show will include just as many highlights as outrages. So here are the things I liked, the things I didn’t like, and the things I’m not sure about from last night’s ceremony:

I Liked Some Things

Everything Is Awesome: Much like The Lego Movie itself, this musical number blew all my expectations out of the water. This was like watching a really giddy acid trip come to life. Legos sang. A dude in a cowboy hat carried a dead dog around. Andy Samberg was on the freaking Oscar stage. It was wildly fun, imaginative, and the kind of untamed, uncynical mess that the Academy Awards could use a lot more of.

Julianne Moore: This feels so just, and so earned. A lot of Oscars are given to honor an entire body of work, and you can point to every part of her career where an Oscar should have been.

Graham Moore (a.k.a. More Moore): Yes, I really wanted Whiplash to win this. I thought The Imitation Game script was the weakest part of an otherwise solid film. However, Graham Moore’s acceptance speech was genuine and sweet. I hope some kid in North Dakota heard him say “stay weird” and immediately hopped in a u-haul and headed towards Portland.

John Travolta: I have no idea what happened to the awesomely suave dude from Saturday Night Fever and Pulp Fiction. Watching his alien robot wiring malfunction two years in a row has been the most spectacularly strange spectacle to witness. It embodies the other reason people watch the Oscars: to see a possible live trainwreck in action. Watching him grab Idina Menzel’s face was like watching Oh Dae-su grab that girl’s face for the first time after being deprived of human contact for years in Oldboy. What I am trying to say is that either John Travolta has a murderous streak in him, or he is an alien trying to learn our secrets.

The Jokes: Maybe it is time to let Bruce Vilanch go? I don’t know, all I am saying is that maybe it isn’t the best idea to give an award to a film about Edward Snowden, and then call him a traitor. Maybe don’t ever say things you will later regret? YouTube exists. These things will live on forever.

Clips: Somebody please do an investigation into who finds the Oscar clips. They spoiled key scenes in Gone Girl and Wild. Another showed Benedict Cumberbatch shouting, “Heil Hitler!”

Eddie Redmayne: Eddie Redmayne is a charming fellow who gave a nice speech. However, I still hold firm to my belief that his performance was a variation of Simple Jack. No disrespect, Mr. Hawking.

The Sound of Music Musical Number: What do you do when your show is already running a half hour overtime? Throw in a musical tribute to a 50 year old film that nobody asked for! To be fair, good job Lady Gaga.

J.K. Simmons: Thanks for getting us in hot water with all our parents, dude.

I Don’t Know How To Feel About These Things!

Neil Patrick Harris: When it was announced that NPH would be hosting this year’s Oscars, it seemed like a no brainer. After all, this guy knows nothing but breathing and hosting. However, his performance tonight was off. I am not sure if it was because the jokes were pretty terrible, or if he seemed a bit too mean-spirited for somebody who usually seems so nice. Having said that, hosting an awards show is a thankless job. You’re steering a ship that everybody wishes would crash. Take what I am saying with a grain of salt; this opinion is coming from a kid who thought Seth MacFarlane was a good host.

Birdman Wins Best Picture: Just a few months ago, critics and audiences alike were getting ready to build a golden statue of Michael Keaton. Then, word spread that Birdman was an Oscar frontrunner and suddenly, people decided to let all of their negative opinions out now. The timing seems a little weird. Where were you all months ago to facilitate a balanced and nuanced conversation?

Anyway, I liked Birdman a lot. Boyhood  was extraordinary. My favorite film of the year was Whiplash but depending on the day, I might have said Boyhood or Birdman instead. But now that Birdman sits on the throne, it must endure the worst nitpicking. Sure, it might not have been the best choice this year (like I said, Whiplash was my favorite but Boyhood made the most sense as an Oscar winner), but it was still an interesting choice. This was a film that at least tried and succeeded at challenging the status quo. It had weird drama and even weirder comedy. Sure, it was a film about show business (Broadway, not Hollywood), but the Academy rarely honors interesting films. I know we are all upset that Richard Linklater can’t go back to Austin with a hunk of gold, take comfort in the fact that Birdman‘s win might actually encourage voters to make bolder choices.