I never thought I’d say this, but the world has found a new “Freaks and Geeks.” The late, great show has found its self reincarnated in the British show “Skins.” It’s “Freaks and Geeks,” uncensored.
“Skins” is so different from most shows today portraying high schoolers in its realism and dimensionality. It follows a large group of friends at a British high school, with each one getting their moment in the sun. There’s Tony (Nicholas Hoult), the cocky, obnoxious pretty boy. Tony’s best friend is Sid (Mike Bailey). Sid lacks the confidence of his best friend. He’s both the kind of guy everyone defines simply as “nice,” and the kind of guy who cares less about his own problems than everyone else does.
Sid is also deeply in love with Tony’s girlfriend, Michelle (April Pearson), who wonders whether or not there’s an emotional being under her boyfriend’s sleaziness. Sid might love Michelle, but he is constantly pursued by Cassie (Hannah Murray), an insecure but sweet girl with eating issues.
The rest of the important players include immature Chris (Joseph Dempsie), kind and musically gifted Jal (Larissa Wilson), and Anwar (Dev Patel), a Muslim grappling with his religious identity, so much so that it leads him to troubles with his gay friend Maxxie (Mitch Hewer).

The rest of the story typically just involves the teens navigating through a world of teenage angst. That could involve screwy relationships, embattled friendships, school work, and drugs. But then it also arches out to broader, everyday issues, like how to cope with getting hit by a car while trying to confess your love for someone.
“Skins” is one of those shows that wants to give every member of its large ensemble time to reveal their stories. Yes, it’s about redemption. Yet, not every character will immediately receive redemption in their assigned episodes. When one character is given an episode, it is their chance to realize their flaws and maybe think of how to change them later on. On “Skins,” redemption is never just given; it has to be earned.
Despite the fact that most of the characters get to redeem themselves, that doesn’t mean everyone is necessarily likable. Unlike most modern American shows, “Skins” doesn’t push to make any of its characters likable. In fact, some of them could be considered detestable. Yet, that’s what makes them human; not every person has the ability to be a totally great human being of any sort.
Unlike many high school stories, “Skins” is not just about its teens. The plot stretches into the lives of teachers and parents. When we see the lives of the parents, we are allowed to experience both the anger and angst that is passed down to the children, and through this we get an even more complex and detailed character study. Basically, everyone has a problem.
“Skins” is most engaging with its fascinating characters. It also manages to grab attention with its unique storytelling devices, the kinds that are atypical for this type of show. Many episodes will end right in the middle of an action, denying its audience of seeing the one action the episode has built up to. It’s a way of saying that the final action doesn’t matter; it’s the path the character took to get their that truly matters.
At other times, the show might even break the fourth wall. In the final moments of season one, rather than having a huggy-kissy moment, “Skins” opts for a very “Magnolia” moment. I won’t tell you how, because that would ruin the strange magic to it. 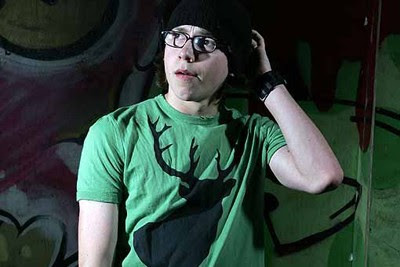 One extremely noticeable thing about “Skins” is how wildly uncensored it is, and sometimes how casually, yet seriously, it tackles some of its more controversial subjects. But hey, maybe swearing and partying are just casual hobbies for kids. Another thing that makes “Skins” great is that it never cuts corners or tries to be a clean version of reality. While it might heighten reality at times (like the episode where they go to Russia, or that whole ordeal with the submerged car), it never veers from its intended vision.
Whenever I review TV shows, I often look at them from the perspective of film. That is, the ones that have episodes that seem cinematic in quality. “Skins” has made me realize that that simply isn’t what makes a show great.
While most episodes of “Skins” can work as self-contained stories, this overall story could never work as a film. The character development that takes place could happen over several seasons, not 90 minutes or so. It’s amazing how we’re not only how deep the show goes, but how many characters it is able to so fully develop. “Skins” will impress not by gags and gimmicks, but simply by a deep and detailed fascination with how people behave.
Share on Tumblr