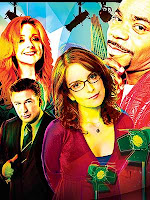 Today marked the announcement of the nominations for the 2009 Emmy Awards. The result: some good, some bad, and some inexplicable.

Lets start with the best show on TV. “30 Rock” was once again nominated for Best Comedy. If it wins again, it will mark three years in a row for the NBC sitcom. As usual, Tina Fey and Alec Baldwin received lead acting nominations for the show, but this year there was a twist. After what I assume was multiple years of angry letters, “30 Rock” supporting actors Tracy Morgan, Jane Krakowski, and Jack McBrayer finally got the Best Supporting Actor/Actress nods they deserved.
The good fortune didn’t end for Tina Fey there. She also scored a nod for Best Guest Actress in a Comedy series for her performance as Sarah Palin on “Saturday Night Live,” an award I’m guessing she will most likely win. “Saturday Night Live” was also rewarded a few more times for having a great season. Kristin Wiig and Amy Poehler both well-deserved received nominations for Best Supporting Actress.
And of course, in the Best Drama category, there was “Mad Men.” The best drama on TV snagged a Best Drama nomination as well as nominations for Jon Hamm and Elisabeth Moss. Unfortunately, the voters forget to acknowledge January Jones, who had a fine performance this season as Don’s betrayed wife. “Lost” also received a Best Drama nomination for its weird, daring, and fantastic fifth season. Of course, “Lost”‘s Michael Emerson received a Best Supporting Actor nomination, but a few great actors from the show were missing. Where was Terry O’Quinn? And Josh Holloway? Holloway deserved a nomination for his Sawyer, who was this season’s most transformed character.
As for the snubs and mistakes, there were many. The biggest offender was the Best Comedy Series category. I think it’s about time that the Emmy Voters end their obsession with “Entourage.” My obsession with the show ended three years ago, theirs has gone on three years too long. Nothing about the show feels award-worthy nowadays. When “Entourage” gets an Emmy nomination, it feels more out of clout than actual worthiness.
If the Emmy voters actually voted for worthiness, they’d have chosen “Pushing Daisies” instead. This was the show’s final season ever. Wouldn’t it have been nice if they could be acknowledged for great work at least once? Few shows have ever been as inventive as “Pushing Daisies” was. At least the charming Kristin Chenoweth snagged a nomination, but what about the pie maker himself, Lee Pace?
This year, the Emmys also decided to break a little ground and allow an animated series a Best Comedy nomination. So, what did they choose to be the first animated show nominated since “The Flinstones?” “Family Guy.” Like “Entourage,” “Family Guy” lost all its charm years ago and has been reduced to a series of meandering pop culture references. What about “South Park?” A great animated series that’s been running for over a decade didn’t get a single nomination. “Family Guy” should surrender its nomination to the far superior “South Park.”
But what snub was most bothersome? The snub of “It’s Always Sunny In Philadelphia.” The show has been running for five years and every year, it is totally ignored. Why? Why is it that great, funny work like this goes under the radar every year? The comedy about a group of losers should this year have become a group of winners. And if not for Best Comedy, why not award the shows fantastic ensemble. They do improvisation like no other show on TV today.
Even if your favorite show didn’t get nominated, there’s still one reason to watch the Emmys this year: host Neil Patrick Harris.
Find the Full List of Nominees Here
Note: I just realized now that I forgot to include the glaring omission of Eastbound & Down’s Danny McBride from the Best Actor category. Why he was snubbed is beyond me.
Share on Tumblr