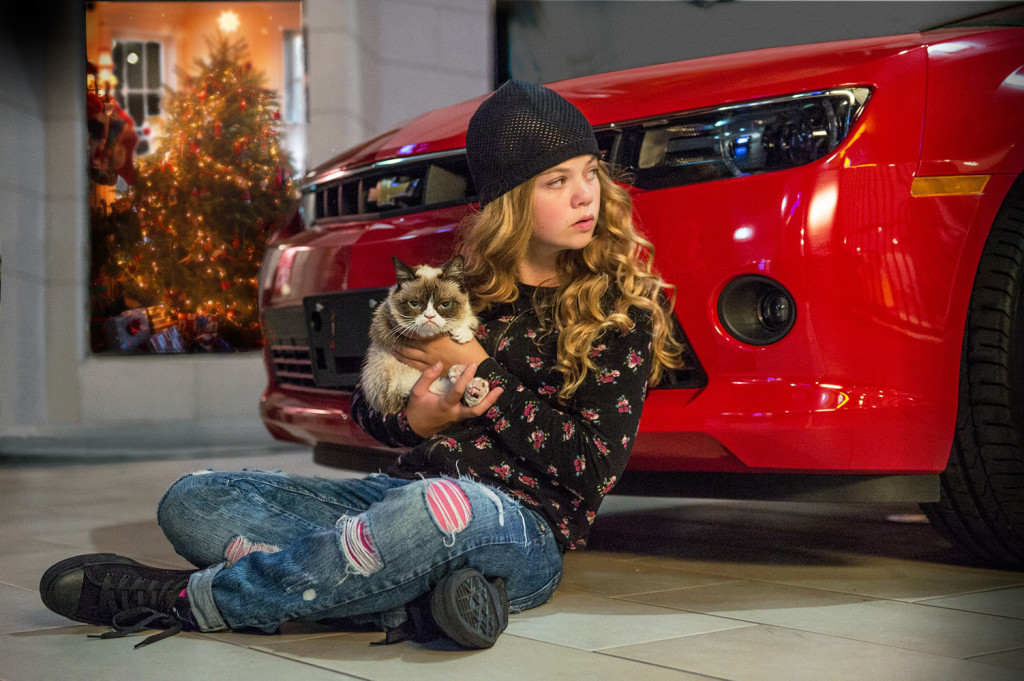 And students…here we see a breathtaking wide shot of product placement. Image via Lifetime

I promised the world that I would review Grumpy Cat’s Worst Christmas Ever. Nobody asked me to, but still, I said what I meant, and I meant what I said, an elephant’s faithful 100%.

So here I am covering a series of firsts. This is not only the first TV movie I’ve ever reviewed, but one of the first Christmas movies I’ve ever reviewed in the history of this site. And to my knowledge, this is the first movie ever made based on an internet meme. Man, I hate that last sentence.

Grumpy Cat’s Worst Christmas Ever is based off of the extremely popular Grumpy Cat meme. The cat in question suffers from feline dwarfism, which gives her the trademark grumpy look. Haha, cat diseases, good one. I wasn’t expecting Grumpy Cat’s Worst Christmas Ever to be a good movie, which is exactly why I added it to my DVR in the first place. However, what I saw on the screen worries me for the future of bad movies.

I am not going to go into a detailed plot explanation because, come on. Grumpy Cat’s Worst Christmas Ever takes place almost entirely inside a shopping mall. For something with this much guaranteed financial success, it looks like Lifetime barely spent a penny on it. I hold no resentment against the incredibly funny and talented Aubrey Plaza for starring in this as the voice of Grumpy Cat. This will probably give her enough money to fund some cool projects once Parks and Recreation ends and, let’s be honest, it is hard to imagine anybody else doing the voice of the titular cat.

To the movie’s credit, it is at least aware that this is a terrible idea. At the very beginning, Plaza’s voice chimes in and says, “you don’t have to watch it, but you know you’re going to.” This is true; the movie is there, and that means that it must be watched. What do we want? Convenience! When do we want it? Whenever it’s all available online to binge watch! Anyway, while Worst Christmas Ever is very self-aware, it doesn’t do anything good with its meta humor. If you were wondering why exactly The Lego Movie is so good, its because it took a bad idea and actually cared about making it entertaining. Meanwhile, the makers of Worst Christmas Ever (one of them being a relative of the legendary director George Roy Hill), seem to have no idea what exactly an audience is looking for when they choose to watch a movie.

In fact, to call this a movie is an insult to movies everywhere. You know your movie is in trouble when the funniest character in it is a dog who says “I like pot roast” and the best pun it could muster is, “devil’s advo-cat.” If your characters are going to be aware that they are in a movie, then don’t have them look directly into the camera and say “hey! I’m in a movie right now!” I never thought I would say this, but this movie about a cat who is grumpy has some really lazy writing.

The saddest thing about Worst Christmas Ever is that it makes me think that sincerity is dead. When is the next time we will get to see a bad idea with good intentions crumble and fall? Sometimes, we need to let bad ideas gestate without a cat popping up on screen to tell us it’s a bad idea. Sure, it sounds terrible to root for the failure of a movie, but this is how successful cult classics are made. That is why this holiday season, we can all be thankful for Jingle All the Way.