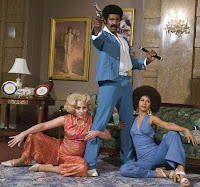 Something very interesting happened while I was watching “Black Dynamite.” For about an hour, I understood what it was getting at, and what it was trying to do. At that, it was doing well. What I couldn’t help but wonder was: where’s the big punchline?

Then, it came. And then I saw that “Black Dynamite” was not just an homage, nor was it a product, it was a twisted, brilliant little movie of its own.
“Black Dynamite,” a film released last year, is a throwback to the ever influential Blaxploitation genre of the 1970s. As the name suggests, it was a genre that exploited black stereotypes (as well as violence) for the sake of entertainment. In the latest addition, Black Dynamite (Michael Jai White) is a former CIA agent who knows Kung Fu.
After his brother, an undercover agent, is murdered in a drug deal gone wrong, Black Dynamite gets his license to kill back and seeks revenge. In the process, he cleans the streets of drugs and uncovers, a deep, and possibly very lethal, conspiracy.
“Black Dynamite” is more than just an homage to Blaxploitation cinema, it is Blaxploitation. This movie could’ve been released amongst films like “Shaft” and “Foxy Brown” and blended in just fine. It transports us back to a simpler time, when it was still acceptable to call a white person “honky.”
Before I go further, I will admit that I’m only loosely familiar with Blaxploitation films. I know more about them through reputation than actual viewing. Having said that, “Black Dynamite” could capture more than a genre; it even captures an entire era. While watching it, I felt reminded of the underrated “Grindhouse.” Both are films that could easily fit into their eras as they both mimic the little things of the films they emulate such as the lighting and even the sound effects.
On that note, “Black Dynamite” has a score that sounds like the great, smooth Funk of Isaac Hayes. That warm glow of the light makes for a light-hearted, utterly entertaining work of film. Meanwhile, the often grainy, documentary-like cinematography, was common in shoe string budget exploitation films.
Now, as I mentioned earlier, lets talk about that little turning point. “Black Dynamite” goes from purposefully silly exploitation to a sort of over-the-top ridiculousness that becomes almost sublime in a scene where Black Dynamite and his men figure a conspiracy out. In one way, it’s mocking ridiculous explanations for twists in films (I’ll never look at the white board scene in “Shutter Island” the same again). In another way, it hops from one point to another in such a form that only someone with a knowledge of film both great and bad could ever come up with. You’ll be astounded not at the fact that you couldn’t come up with it, but that anyone could ever think of something like this in the first place.
I would definitely credit much of the film’s success to Scott Sanders’ 70s style direction. But much credit should be given to the screenplay, which is co-written by star Jai White. It remains totally in the era and manages to make several running jokes (such as the repeated use of the phrase “jive turkey”) fresh throughout. Despite the film’s extremely short running time, it still manages to get most of what it sets out accomplished. There were a few strands, like a corrupt congressman character, that remained somewhat unsolved at the end. Then again, this is a tribute to imperfect cinema.
“Black Dynamite” is the kind of film I could see myself watching several times and not tiring of it. In its goal of not only evoking a past era, but becoming a part of it, it succeeds admirably. Oh, and I forgot to mention that odd yet almost audacious thing it does with a certain former President of the United States. Guess you’ll just have to find that out for yourselves.
Share on Tumblr