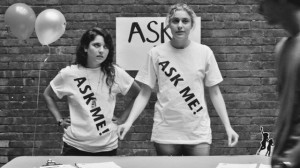 Here comes the most fun part of Oscar season: declaring how you would have voted if you had earned Academy credentials. In just one post, any blogger can immediately feel superior. So please, just let me have this.

Now, it is fairly reasonable to expect that the Academy cannot reward anything. In the future, most people don’t even remember all of the nominees, and a lot of films that get overlooked by the Oscars do fine in the future. For instance, “The Searchers,” one of the most influential films of all time, was completely ignored by the Academy when it came out in 1956. It seems like history has not been as kind to “Around the World in 80 Days.”

None of us know what the future will hold. So instead, let’s live in the moment and ponder where the Academy got it completely wrong. If I was a voter, here are the actors, writers, directors, and films that I would have included on the ballot:

Everything about “Inside Llewyn Davis” could fit in here. The writing, directing, and performances from the likes of Justin Timberlake and Carey Mulligan. However, Oscar Isaac’s snub for what is likely to be a career-defining performance seems to be the most perplexing. For starters, the guy actually performed every single song. From the passionate desperation of “The Death of Queen Jane” to the redemptive energy of his final performance of “Fare Thee Well (Dink’s Song),” Isaac had incredible range and at the same time used musical performance to bring Llewyn’s story arc to an uncertain full circle. At one point in the film, Llewyn describes a folk song as something that “was never new, and it never gets old.” That is how both Isaac’s performance, and the film as a whole, feel. Like every folk song and every Coen Brothers’ film, time will only be kind to it.

Scarlett Johansson probably didn’t qualify for the award, given that only her voice appears in the film. If only the Academy voted subjectively instead of objectively. As the OS Samantha in “Her,” there was never a moment where Johansson’s presence wasn’t felt. Using every part of your body in a performance is one thing, while using just your voice and and feeling physically present while doing so is another feat entirely. “Her” is about the possibility of a machine being human. Spike Jonze came up with the idea and the character, but Johansson made it feel sincerely real.

From “The Thin Blue Line” to “Grizzly Man,” the Academy has a bad reputation for ignoring some of the most talked about documentaries for their respective years. This year, “Blackfish” was the unfortunate victim. This haunting documentary about the Orcas in SeaWorld made a fairly obvious point that whales were not meant to live in a tank in such a convincing way while also focusing on the amazing beauty of these animals. The joke is on the Academy though, as “Blackfish” has made a huge impact on our culture. It has certainly caused a big public backlash against SeaWorld. Meanwhile, some SeaWorld executives may just be toasting the film’s loss. To that I say f**k you, SeaWorld. Your Splash Zone sucks.

I thought this delightful indie would at least get a nomination for Noah Baumbach’s and Greta Gerwig’s funny and original script. Maybe Academy voters forgot what it was like to be in your 20s, and couldn’t connect with any of the energy and confusion that pulsed through “Frances Ha.” If not for writing, then why not for Gerwig’s performance as 2013′s most endearing misfit? Or even the black-and-white cinematography,  which felt perfect as opposed to pretentious.

If Tom Hanks were to be nominated for an Academy Award for any film this year, conventional wisdom would say that it would be for the Oscar-baiting “Saving Mr. Banks” (a.k.a. “Pear Fest 2013″). However, it was his performance in “Captain Phillips” that truly defined the Hanks of last year. Hanks managed to keep his Mr. Nice Guy public image while simultaneously playing against type. He played Richard Phillips as somebody who demanded respect, even when he was trembling with fear. Whatever you say, Somali pirates, Tom Hanks is and always will be the Captain.