Steven Spielberg has always said that as a child, he would make his model train crash and film it. Decades later, somebody decided to crash a train on film, and they did it just the way Spielberg would have done it.

“Super 8,” named after the film format, is a cinephile’s paradise. It’s a tribute to the great sci-fi, monster, and buddy movies of the past. Think “E.T.” meets “Jaws” meets “Stand by Me” and “The Goonies.” Only a director this in touch with films past could make this movie. Luckily, J.J. Abrams is that guy.
“Super 8″ is a little different than you might expect. For one, it’s not the explosion-a-minute summer blockbuster that has clogged American movie theaters for the past decade or so. It is first and foremost a story. It takes place in the late 1970s in a small Ohio town where a group of kids are trying to make a zombie film. While filming, they witness a terrible train crash. After the train crashes, a series of mysterious events sweep the town, likely prompted by something strange onboard that train. 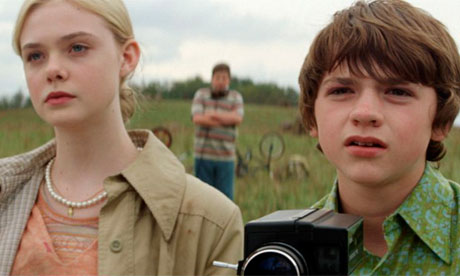 “Super 8″ made me feel nostalgic for an era I didn’t even grow up in. Additionally, this is the first summer blockbuster I have seen in ages that actually had an enjoyable screenplay. Even “Inception” wasn’t this well written. It has snappy dialogue and endearing characters. The best part about it though, is that it has a heart. Rarely does a mainstream action movie come along that actually cares about what happens to its characters, rather than just what happens if they blown up.
The story of “Super 8″ goes into some very dark territory, exploring death’s effect on children, the effects of bad parenting, and the meaning of love and friendship at such a young age. Like Spielberg, family is an important bond between the characters of an Abrams film. The fact that this film focuses on these issues rather than just plot is something worth celebrating.

The special effects, action, and the monster itself are nothing revolutionary, but that’s not a bad thing. The train sequence is one of the best I’ve seen, just ranking somewhat below the train explosion from “Lawrence of Arabia.” Abrams films it the way he filmed the plane crash in the very first episode of “Lost”: it’s not the crash itself, but the aftermath that is so frightening and exhilarating. Watching how the characters deal with the wreckage is like an ultimate test of their will to survive.
While this film contains the many strong suits of a Spielberg film, it also contains some of his weaknesses. Like “War of the Worlds” and some other Spielberg pictures of recent years, “Super 8″ resorts to over-sentimentality in its ending. Worst of all though, its ending feels rushed, rather than earned. All of this buildup ultimately leads to something uninspiring and unoriginal. Based on how good the rest of the story was, I think Abrams was capable of something better than this. Even “Cloverfield” had a better ending.
The ending of “Super 8″ certainly has some effect on how I perceive the entire movie, yet the film as a whole is hard to hate. It is just so lovingly crafted, only someone who has ever devoted their entire life to film could ever have made a movie like this. It never treats its audience as if it is dumb; it challenges the viewer, and makes them wait for the action.
When the plot is boiled down, it is not about some awesome superhero trying to save the world from robots or aliens, it is simply about a bunch of kids trying to make a movie, and how their movie was disturbed by the presence of a monster. Sometimes, the problems of childhood are much more interesting than the issues of adults.