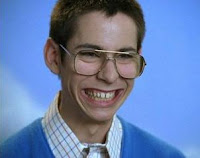 Director Greg Mottola (“Superbad”, a few episodes of “Undeclared” and “Arrested Development”) is riding his deserving wave of “Superbad” success (yes, someone besides Judd Apatow was involved) for a new movie called “Adventureland.” It’s based partly of Mottola’s real life job he had working at Disneyworld after college. And it stars such new age comic geniuses as Martin Starr (“Freaks and Geeks”), Kristen Wiig (SNL) and that kid from “The Squid and the Whale.” Like “Superbad” it looks like it’ll mix hilarious gross out humor with a sweet coming of age back story. Also, it’ll most likely be a more realistic account of teen life than “The Hills”, which I cannot stress enough.

Will this be the next “Superbad?” Judge for yourself with the trailer below:
Share on Tumblr